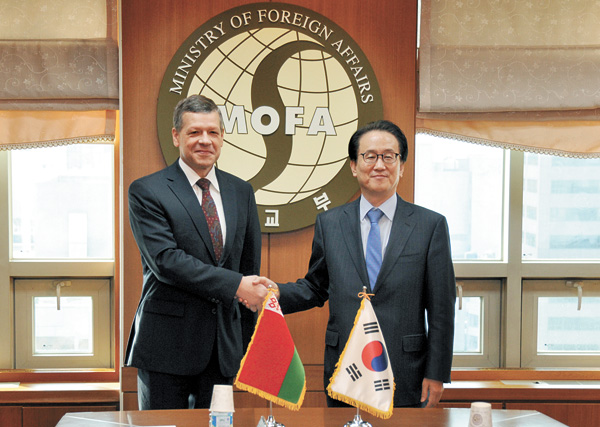 Belarusian Deputy Minister of Foreign Affairs Valentin Rybakov called for the early implementation of South Korea’s proposed Silk Road Express as a means to connect the Korean Peninsula with Eurasia and beyond.

In a recent interview in Seoul, Rybakov added that Belarus, as a founding member of the Eurasian Economic Union, can “provide a base” for Korean businessmen and investors. The regional trading bloc that brings together Belarus, Russia, Kazakhstan and Armenia, with Kyrgyzstan set to join later this year, came into force at the beginning of this year.

The Belarus envoy said that the Park Geun-hye administration’s Eurasian Initiative, a plan to boost the regional economy through free trade and economic cooperation within the Eurasian bloc, is in line with Belarus President Alexander Lukashenko’s initiative for international integration.

“Belarus is geographically located in the heart of Europe, between the Russian Federation and the European Union,” Rybakov told the Korea JoongAng Daily in an interview at Lotte Hotel in Seoul on Tuesday. “Roads going from east to west, from south to north, run through Belarus. So if your president decides one day to be able to go by train from Seoul to Paris, she will definitely go through Minsk, our capital.”

“Belarus, unlike Korea, is a landlocked country,” Rybakov said. “But we prefer to think of ourselves as being land linked.”

Rybakov, on his second visit to Korea in five years for a four-day visit last week, headed a Belarus delegation and held talks with Korean Deputy Minister of Foreign Affairs for Political Affairs Lee Kyung-sook for an eighth round of political consultations between the two countries.

They focused on expanding bilateral cooperation in trade and investments, science, technology and ICT, and discussed the Eurasian integration process.

Rybakov emphasized that it is “high time” for the two countries to have a visa-free regime in his talks with Korean officials in order to strengthen business ties and promote tourism.

“Belarus right now is the only European country for which a Korean citizen needs a visa” and vice versa, he said. “The situation is further complicated by the fact that you have visa-free regimes with the Russian Federation and with Kazakhstan.”

Rybakov continued, “It’s absurd that you need a visa to go to one of the countries that is in the same structure in the Customs Union.” Belarus has been pushing for an early agreement to mutually exempt their traveling nationals from needing short-term visas.

“We do not have an administrative border between Belarus and Russia. So a Korean citizen who is in Russia, for instance, might inadvertently and unknowingly violate our immigration laws if he or she travels from Moscow to Minsk thinking that they do not need a visa to go to Belarus.”

Rybakov called 2014 a “very successful year for the relationship between our two countries.”

“It works in Minsk as a trade department for your embassy in the Republic of Belarus and plays a very active role in establishing contacts between business people and companies of our two countries,” Rybakov said.

“That was very symbolic because it was the first ever visit by a Korean minister to the Republic of Belarus,” Rybakov said. “It was also the first foreign trip by the minister himself [after he took office] ... It opened new pages in bilateral cooperation and also led to a number of significant practical results in our cooperation.”

Mutual bilateral trade was around $180 million last year, he added.

“Belarus, like Korea is a country that practically does not have any mineral resources,” Rybakov said.

“When you don’t have oil, gas or other minerals or natural resources, all you have is your brains and creativity to move ahead... And of course science and technology plays an important role in developing our county.”

Belarus is known for its heavy duty trucks and set a Guinness World Record with its 450-ton capacity dump truck, though potato chips are some of its most popular exports in Korea. Korean household electronics are also popular there. Around 2,000 people travel between Belarus and Korea each year, but “the number is growing by 10 to 15 percent every year,” Rybakov said.

The two countries will celebrate the 23rd anniversary of the establishment of diplomatic relations on Tuesday.