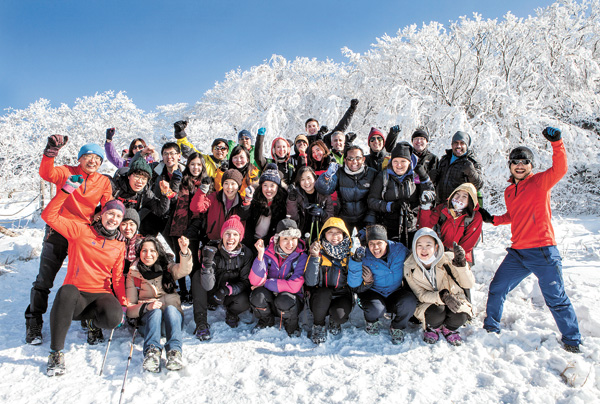 Members of Climbing in Korea, a hiking club made up of Koreans and foreign residents, gather on Jan. 31 near Sobaek Mountain’s Biro Peak in Danyang County, North Chungcheong. By Park Sang-moon

One morning late last month, Marc De Vestele made his way to a snowy hiking trail on Mount Sobaek, marveling at the exotic winter scenery he had rarely laid his eyes on after landing in Korea last year.

Without a driver’s license, Vestele, who works at the Belgian Embassy as the economic and commercial attache, found it difficult to navigate in a foreign country.

That is, until he joined Climbing in Korea (CIK), a local hiking club he heard about from a colleague at the Swedish Embassy.

For Vestele, it felt like a golden opportunity to finally travel outside of Seoul and explore the suburbs.

Participants gathered on the scheduled date, and before he knew it he was on a charter bus departing the capital city.

Two and half hours later, the mountain, 1,439 meters (4,721 feet) high and blanketed with feathery white snow, was spread before him.

“It’s fantastic!” Vestele exclaimed, adding that he looked forward to further discovering Korea and its countryside after so many months sandwiched among Seoul’s high-rises.

When asked whether he would participate in the next week’s hike to Mount Seorak, the third-highest mountain in Korea at 1,708 meters, he answered without hesitation: “Oh yeah, definitely.”

Accompanying Vestele on Jan. 31 were 39 others, mostly foreigners from Germany, India, Malaysia, Switzerland, United States, as well as Korean locals.

The club gathers 40 to 50 of its 4,000 multinational members every Saturday for a four- to nine-hour hike across some of the country’s most glorious mountains, traveling to as far as Mount Halla on Jeju Island.

Rafting and kayaking are substitute programs in summer.

“Foreigners join the club to learn more about Korea, its people and the high terrains,” said Kim Sung-won, 51, one of the organizers of CIK. “Coming here, they learn how to care for others and how to push and pull their teammates up. That’s the art of hiking.”

The charter bus for Mount Sobaek was parked near Sports Complex Station on subway line No. 2 in Jamsil, Southeastern Seoul, for the club’s members, who had to meet a little before 8 a.m.

Four organizers and assistants waited in front of the subway exit, greeting newcomers with a firm handshake and others with wide grins and open arms as they took a roll call before escorting the hikers, mostly between the ages of 25 and 35, to the bus some 10 meters away. No one was considered a stranger on the bus, and everyone spoke in English.

Jade Cohen, a 23-year-old English teacher from Minnesota, said amiability is one of the greatest aspects of CIK. “It’s really well organized, really convenient and everyone is so friendly,” she said. “The group is so inclusive and you make new friends every time you come.”

Kim attributes that largely to the Korean participants, whose priority is to practice their English while learning about a new culture, which makes hospitality inevitable.

The foreign residents also find the cosmopolitan atmosphere appealing, but physical training and exploring nature are mostly why they join CIK.

Whatever the initial impetus, everyone is bound to get along - so much that some relationships grow deeper than sheer camaraderie.

“In our five-year history, our group has produced seven to eight married couples!” Kim boasted.

Though, he was quick to add that those with ill intentions were prohibited from joining CIK. “We bluntly tell them, ‘You don’t belong here. Go somewhere else.’”

In fact, the CIK has a no-alcohol policy, unlike most other Korean hiking clubs, which consider makgeolli, or rice wine, the best pleasure to savor near the summit.

The group “very rarely” goes out for chicken and beer, he said, except in cases in which they hold farewell parties for senior members about to leave the country.

The group arrived at 10:40 a.m. at the start of the hiking course, where they got off the bus and stood in a circle for a five-minute warm-up at Eouigok Information Center, one of the few moments during the six-hour excursion that every member was gathered together.

Dressed in layers of multicolored clothes, hats and gloves, and equipped with gaiters and crampons, some members clapped while others shouted “I’m totally pumped up!”

The sun was out and the sky crystal clear, though the temperature was another story - at minus 10 degrees Celsius (14 degrees Fahrenheit).

Pointing to the heavy snow that had fallen just two days before, the park rangers said the club was “extremely lucky to be hiking on a day as beautiful as today.”

Strolling up the 11.6-kilometer trail, flanked by groves of yew trees, nothing but the crisp sound of crunching snow beneath each step and the giggles of the hikers resonated through the woods.

The group naturally divided into three teams within 15 minutes based on speed, each led by one of the organizers. There was no nudging to quicken or slow the pace.

“It really confuses me to see my Korean friends do nothing but shop and chat in a cafe,” said Kaitang Yang, a 27-year-old from Taiwan who was walking in the second group among the three.

It’s only been two months since she arrived here on a working holiday visa, though she said she feels like she already understands the leisure culture among young Koreans - mostly because of its simplicity or, according to Yang, it’s banality.

“One time I went to a cat cafe with my friend near Ewha Womans University, and surrounding me were about seven different couples, each on their dates,” Yang said. “I asked my friend why there were so many couples, and she told me it’s a trend in Korea to go to coffee shops on dates.”

My message to them is "'Go hiking! People here just don’t know how much of a gorgeous place they live in!”

Up toward Biro Peak, with each group now moving some hundreds of meters away from each other, trees were nowhere to be seen beside the hiking trail.

Vast fields of snow softened the ridge, and neighboring mountains that sparkled in shades of green and white under an exuberant sun, had everyone rummaging in their backpacks for their cameras and cell phones.

The light bouncing off the mounds of snow were so blinding, in fact, that some rushed to lower their hats or take out their sunglasses.

“I feel very odd,” said Cohen. “It’s like a winter wonderland. It is so pretty that mountains are all around us and very majestic, too. I don’t know [how to put it].”

Perhaps spoiling her moment of awe was a question by a reporter concerning what she dislikes about CIK.

“No, nothing really, unless you’re the slow one in the group like I always am and then you get left behind slightly,” she said with a laugh.

The group arrived around 5 p.m. at Cheondong Information Center, where they hopped on their charter bus and departed back to the city.

Landing in Seoul near 8:30 p.m., the organizers bid farewell to each hiker as they got off the bus, not with a mere handshake as in the morning, but with a pat on the shoulder or with a hug.

“See you next week at Mount Seorak!” they shouted.