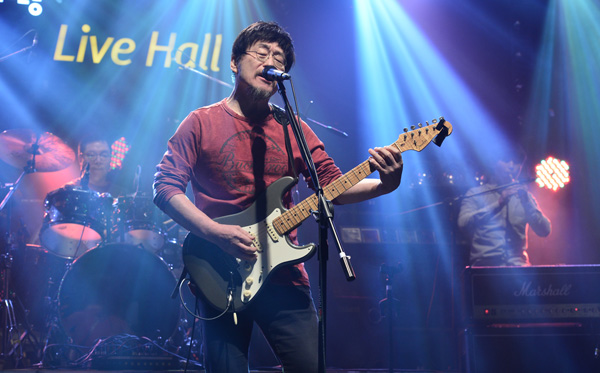 Of all the Korean musicians who began performing back in the 1970s, only a few have survived the turbulent changes in the nation’s music scene. Singer Kim Chang-wan, 61, has been an active performer since the time people consumed music exclusively through LPs.

Kim is the lead vocalist of the rock group Kimchangwan Band and a former member of the now-defunct Sanulrim, also a rock ensemble.

“I must have been quite obsessed to walk away from Sanulrim when I released Kimchangwan Band’s first album,” said Kim in his typical slow and relaxed voice. 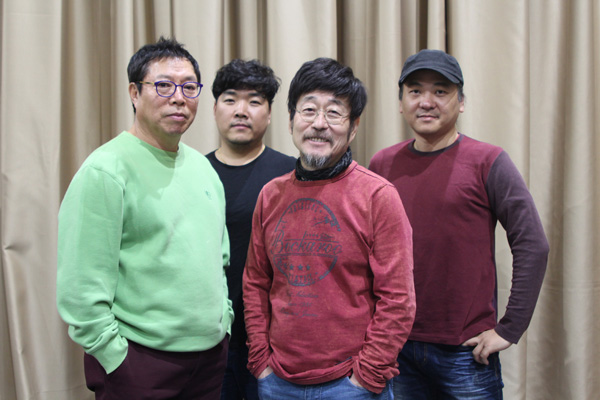 Members of the Kimchangwan Band from left: Drummer Kang Yun-ki, keyboardist Lee Sang-hun, lead vocalist Kim Chang-wan and guitarist Choi Won-sik. Yeom Min-yeol, the youngest member of the band who is not pictured, is currently serving his military duty. Provided by Epari Entertainment

“But from the second record, I went back to the roots of Sanulrim, and now we feel like we’ve earned our own color with this record.”

After the death of Kim’s youngest brother in 2008, who was also a member of Sanulrim, he joined hands with younger musicians and created Kimchangwan Band.

But when people hear the new group they still think of Sanulrim, which many associate as the pioneers of truly Korean rock music.

The trio that made up Sanulrim - Chang-wan, Chang-hun and Chang-ik - broke into the music scene in 1977. The band’s debut song “What, Already?” was a sensation because the type of music the band played was unheard of at the time.

Most local rock groups mimicked bands from Western countries back then, but the trio was credited for bringing a Korean sentiment to the genre.

With their third album, Kim and his band said they wanted to redefine what “forgiveness” is.

When asked why he chose this concept, along with reconciliation, as the themes of his new album, Kim said “I think we forgot what forgiveness means some time ago.

“If I say to someone that I will forgive you, it sounds so violent and cruel to me. The true meaning of forgiveness is completely removing the things [that someone has done to me] from my mind.”

In the track titled “Forgiveness” from the third album, Kim sings “forget everything. Memory is poisonous.”

Kim said the tragic accident in which the sunken Sewol ferry took the lives of more than 300 people inspired him to choose the theme for the album, but that it was not the main reason for him to address the issue of reconciliation and forgiveness.

Kim and his band also discuss a different form of communication in the track “7th Grader.”

Seventh-graders, who are in their second year of middle school, often make headlines because of their rebellious spirit. Some call the stage of puberty jungyibyeong, or a disease specific to that period of adolescence.

Even one widely repeated joke says North Korean leader Kim Jong-un could never initiate an inter-Korean war because of the strength of troubled teenagers living in the south.

“I think communication is possible even if I don’t understand others just by accepting them as they are,” said Kim.

For the album, Kimchangwan Band also collaborated with many younger musicians from various fields.

For a track called “Laying Silks and Satins in My Heart,” which was originally released in 1978 by Sanulrim, Kimchangwan Band collaborated with gugak, or traditional Korean music, performance group Jambinai.

The geomungo (Korean zither), haegeum (a string instrument) and piri (a double-reed instrument) are used for the track.

“I’ve been thinking for so long about what makes Korean rock music Korean from the first time I began singing,” said Kim.

Kim may say he always wanted to know what makes Korean rock music so Korean, but Sanulrim is considered to include national sentiment in its ethos the most by several music critics and industry insiders.

Famed music critic Lim Jin-mo defines Sanulrim as “the most Korean rock band among all others.”

The legendary group has released diverse genres of rock that appeal to people in their 20s, 30s and 40s. It even released songs for children.

Under the military regime, all cultural content - from TV dramas to songs - was strictly censored.

But the unconventional and colloquial lyrics and melodies, all written and composed by the three brothers, brought a much-needed freshness to the music scene that was battered by frequent censorship, although most of Sanulrim’s lyrics had to be modified.

“People who went through the 1970s, ’80s and ’90s were all comforted by the band’s music,” said producer Kim Min-ho, who organized a tribute concert for Sanulrim in 2011 to commemorate the 200th episode of the TV music show “Nanjang.”

Sanulrim’s music still exerts an influence over the rock bands of today, such as Jang Kiha and the Faces, and even those who perform other genres.

“We all grew up listening to Sanulrim and their music used to feed us,” said R&B singer Jung Yup, who was part of the 2011 tribute concert.

Marking the release of its third album, Kimchangwan Band will hold concerts between Feb. 12 and 14 at DCF Daemyung Culture Factory, located in Daehangno, central Seoul.