It’s all about humor, sustainability at M&O Paris

It’s all about humor, sustainability at M&O Paris 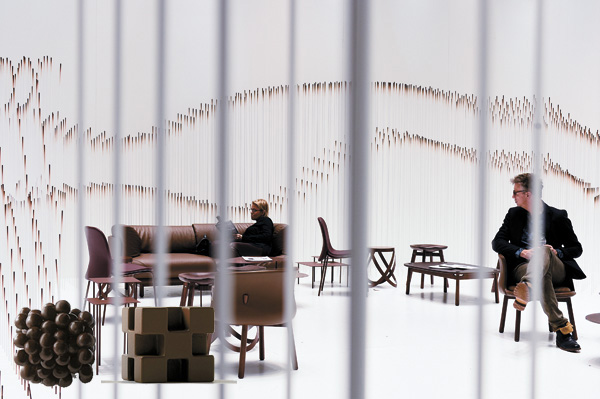 For this year’s Maison et Objet Paris, one of Europe’s biggest furniture and interior design fairs, Nendo, a Tokyo-based design house, created a Chocolatexture Lounge, which, as its name suggests, was inspired by chocolate. Nendo, founded by young designer Oki Sato, was chosen as the Designer of the Year at the January edition of the trade show. The cream-colored lounge has dark brown furniture that Nendo designed in recent years and is surrounded by 2,000 thin pipes whose colors gradually change from white to chocolate. By Anne-Emmanuelle Thion. Left: Two of the nine chocolates designed by Nendo. Provided by the design house

PARIS - First-timers at Maison et Objet Paris, one of Europe’s largest furniture and interior design fairs, could be curious about why so many other visitors drag wheeled suitcases with them.

Were they all international buyers who had just arrived straight from Charles de Gaulle Airport?

Once you tour just one of the eight halls in the Paris Nord Villepinte exhibition center, where the trade show is held, you will soon realize they are not.

The real reason why this type of baggage is so prominent is because it is practically impossible to lug around catalogs from all the exciting booths without any help. 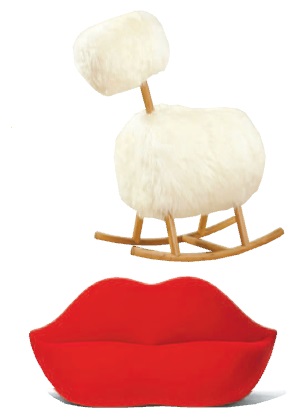 Those who have visited COEX in southern Seoul, where many large fairs are held in halls A and B, an 18,000-square-meter space, can recognize how large the Parisian trade fair is in comparison.

The diversity of the products on display and the creativity of their designs is also impressive. Hall 1 is mainly for ethnic furniture and decorations; Hall 2 is for textiles; Hall 3 for tableware and kitchen appliances, Hall 4 and 5 for furniture, home decorations and crafts and Hall 6 is for gift items such as stationery and toys.

Hall 7, on the other hand, is a feast for the eyes where luxury fashion and decorative brands such as Italy’s Missoni and France’s Lalique are concentrated, while Hall 8, which presents the most innovative and the wittiest designs at the show, could be its highlight.

Top, Japanese firm Bunaco shows stools and lamps made of wood tape. Above, nearly everything in Molo’s booth of is made from paper with a honeycomb structure.

With its beautiful walls made of strips of paper five meters (16 feet) tall, the booth for Canadian design studio Molo stands out even among the most eye-catching brands in Hall 8. Almost all other items at the stand are made of paper created with a unique honeycomb structure that can be folded, unfolded and flexibly extended, just like an accordion.

Pointing to the “Benchwall,” a paper bench combined with a partition, a representative at the booth said, “It can be stretched into a long, straight wall or could create a circular room by interlocking its two ends. The essence of our ‘soft’ series is the flexible use of space.”

The representative stressed that the material is 100 percent recyclable because the company pursues sustainability.

Japanese company Bunaco shows a similar philosophy even though the style and material of its products differs from the Canadian brand.

In its booth, also located in Hall 8, wooden pendant lamps with simple and gorgeous curved lines spread a very gentle and warm light. These, along with the wooden stools on the floor, have unique stripes that resemble those seen on ceramics made with a pottery wheel.

“This is because we make all the products by rolling up a kind of wood tape,” explained Yuka Matsumoto in the booth. “We cut 1-milimeter-thick tape-like strips out of Hokkaido beech trees and roll them up into stools, lamps and vessels. They are much lighter and are even much more durable than those that are made by carving wood pieces.

Accentuating the green theme, Matsumoto stressed that their methods minimize the waste of wood and help prevent deforestation as a result.

“Many years have already passed since ‘eco-friendly’ emerged as an issue in the Maison & Objet show,” said Eom Say-young, chief director of Alife Design. “But it can be a recent trend in that the issue has become very common and general.”

The Korean company that focuses on travel products has participated in the Paris show for the last 11 years.

Aiden Ung Choi, chief executive officer of Notag, a London-based agency that connects small Korean design houses with European companies, agreed, adding that there is one more prominent trend at the fair.

“It’s ‘fun,’?”said Choi. “Designers are now concerned not only about beauty and functionality, but also about humor and fun.”

Many designs with playful qualities catch the eye in Hall 8. The staff from Italian company Gufram, which has been leading postmodern design for furniture since the 1960s with its unconventional ideas, ask visitors to sit on the company’s classic red 1970s Bocca lip-shaped sofa. It is inspired by renowned surrealist artist Salvador Dali’s painting “Il volto di Mae West” (1934-35). Gufram’s latest product, a chair called Bounce, is created in delightful pastel colors reminiscent of candies.

The British company Innermost’s booth is also full of humor. The white rocking chair Hi-ho with its sheep-like shape constantly lured visitors to the brand’s stand.


A lounge inspired by chocolate 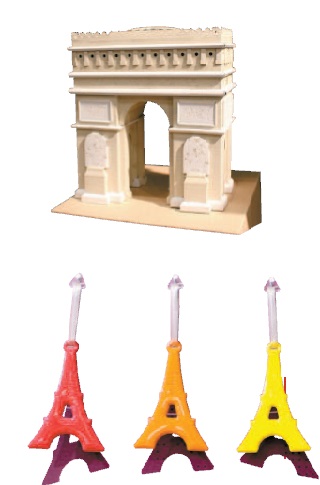 Top, the Arc de Triomphe built with interlocking pieces of paper, is a product by Korean brand Papero Bean. Above, luggage tags by Korean company Alife Design. By Moon So-young

To convey humor in design is also a characteristic of Oki Sato, founder of Tokyo-based design house Nendo, which was designated as Designer of the Year at M&O Paris 2015 January.

“Of course, design should be functional,” Sato, 38, said in a recent interview with a French magazine Maison a Part. “But in the word ‘function,’ there is the word ‘fun’ hidden inside.”

For this year’s M&O Paris, Nendo introduced its Chocolatexture Lounge, a rest area for visitors to the trade show. As its name suggests, it was inspired by chocolate. The cream-colored lounge has deep brown sofas, stools and tables, which Nendo designed over the last few years for famous furniture companies such as Italy’s Cappelini and Moroso. It is also surrounded by 2,000 thin pipes in various heights. Their colors change gradually from white to chocolate. In a corner of the lounge, real chocolates designed by Nendo were on sale.

Wonmin Park, above, known for his “abstract- painting-like” Haze series, top, was picked as one of the Rising Asian Talents by M&O. Provided by the designer

Asian design houses - except for those from Japan - are not frequently seen at M&O Paris. Only one Chinese brand participated, despite the fact that there were many journalists and visitors from the country at the fair, showing the growing interest in interior design from one of the world’s biggest markets.

The state-run Korean Craft and Design Foundation (KDCF) and seven domestic companies participated in the exhibition. Except for the foundation, which was in the craft section in Hall 5, all the Korean booths were at Hall 6, an area for small gift items.

When asked why, Eom of Alife Design, which has been participating in M&O Paris the longest out of the Korean companies, said, “It is hard for non-European companies to attend the show’s other halls because it costs a lot to deliver bulky furniture to the show. As for Japan, it has already gained European recognition for its design brands, so the transportation cost is offset by the sales received through participation in the fair.”

But Korean brands are beginning to show competitiveness. Among the domestic participants in M&O Paris, Papero Bean was attracting visitors with its unique toys constructed from paper. The company’s products are made from interlocking paper pieces designed to be assembled into elaborate world landmarks and vehicles without need for scissors or glue.

It was the third time for the design company to attend the trade show in Paris.

“Thanks to the participation last time, we came to supply our Arc de Triomphe product to the souvenir shop of the real Arc de Triomphe de l’etoile in Paris,” said Michelles Kang, head of Papero Bean’s strategic marketing team. “The new product we will introduce in this show is the Titanic ship.”

The KDCF booth, which presents work by nine Korean craftsmen, was visibly popular. Attendees showed particular interest in the decorative papers at the booth, which have silk-screened patterns, and the forms of Korean traditional porcelains, which can cover any used bottles to transform them into fine antiques.

“However, it is only occasional that such interest leads to a contact in sales,” explained Seo Yun-kyung, senior manager at the foundation. “We focus on improving recognition. When we came here in 2008 for the first time, most European visitors had no idea about contemporary Korean craft. Now, their awareness has improved.”

M&O is not satisfied with presenting European designs. It launched its Asian edition in Singapore last year and will launch its U.S. version in Miami Beach this year in celebration of its 20th anniversary. The Designer of Year and Rising Talents will be designated for each show.

“We are working on a project in Korea, Amore Pacific’s flagship store in Gangnam, southern Seoul,” Lyndon Neri said.

Among the six Rising Talents is Korean Wonmin Park, 32, who studied in Eindhoven, the Netherlands, and is based there. He participated in the 2013 group exhibition “Design, Another Language” at Korea’s National Museum of Modern and Contemporary Art.

“To maximize the visual appeal of his pieces, Park uses resin, and the end results are visual feasts, reminiscent of an abstract painting,” M&O said on its website. “His design furniture demands equal consideration as both practical commodity and fine art.”