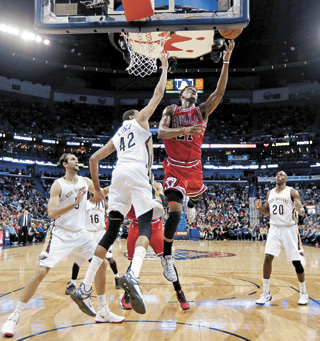 Chicago Bulls guard Jimmy Butler (21) goes to the basket against New Orleans Pelicans center Alexis Ajinca in the second half of the game Saturday in New Orleans. [AP/NEWSIS]

Anthony Davis stood in a hallway outside the Pelicans’ and Bulls’ locker rooms, wearing a gray sweatsuit and smiling as he engaged Chicago Coach Tom Thibodeau in a good-natured postgame chat.

After a hard, awkward fall on an alley-oop dunk had sidelined Davis with a sore right shoulder, the All-Star’s demeanor could be seen as an encouraging sign for New Orleans - and the NBA. The dangling, empty right sleeve of Davis’ sweatshirt - the result of his arm being tucked in a sling - was more worrisome.

“Anthony’s a player that makes a big difference, so it was a tough hit for them to take,” said Gasol, whose 20 points and 15 rebounds helped Chicago snap a three-game skid. “We knew that we just had to stay at it and be aggressive on both ends of the floor and that’s what we did.”

Derrick Rose added 20 points for the Bulls, who went on a 40-11 run after Davis went out.

Pelicans Coach Monty Williams said the extent of Davis’ injury may not be known until Sunday, when he was expected to be examined further.

“He says he’s a bit sore right now. He couldn’t move his arm the way he needed to, so we got him out,” Williams said. “He kept saying he was OK. ... but the doctors didn’t feel good about getting him back out, so we’ve got to get more evaluation and we’ll have a better update” on Sunday.

The dunk that drove Davis from the game was a two-handed jam of Tyreke Evans’ lob. Davis’ body swung like a pendulum as he held the rim, then the 6-foot-10 (208-centimeter), 240-pound (109-kilogram) forward fell horizontally as he lost his grip.

Davis stayed in the game briefly before taking himself out with the score tied at 35 and 4:16 left in the first half.

Evans had 15 points for New Orleans, while Alexis Ajinca scored 10.

With Davis in the locker room, Chicago closed the first half on a 13-4 run that included two 18-foot jumpers by Gasol, Rose’s 3 and Taj Gibson’s putback dunk that made it 48-39.

The Bulls then blew the game open by starting the third quarter on a 27-7 run that included 3s by Snell and Gasol. Butler’s dunk put Chicago ahead 75-46 with 3:56 left in the period.

The Pelicans never got as close as 20 after that and trailed by as many as 36 points in the fourth quarter.