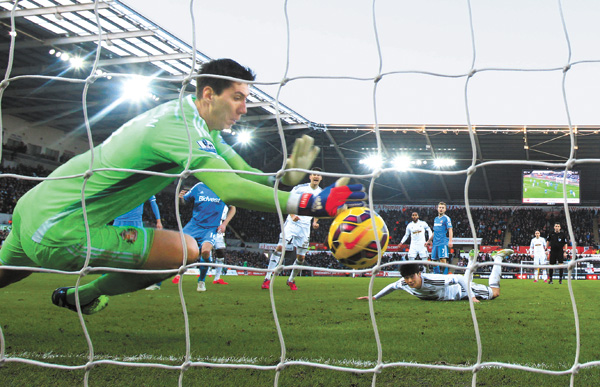 The Korean A-team’s captain, Ki Sung-yueng, unleashed his fourth goal of the season with Swansea City FC on Saturday in a 1-1 draw against Sunderland AFC.

It was his first match back after playing for his home country during the Asian Cup in Australia.

Swansea allowed a goal by Sunderland’s Jermain Defoe in the 42nd minute but Ki equalized with a diving header in the 66th minute, ensuring that his team will stay ninth place in the EPL for the time being with 34 points in 24 games.

Ki remaining on the field through to full time that day was a surprise because he flew back to England just four days ago.

He also started in all six of Korea’s Asian Cup matches and played from beginning to the end in five of them.

In the other game, which was a group match against Iraq, Ki was subbed in injury time during the second half while the team was leading 1-0.

But manager Garry Monk sent him in till full time again for Swansea, and apparently his jetlag and tiredness wasn’t a setback.

“I was so tired to be honest, but I tried not to let it show,” Ki said after the match.

“A professional must play for the team, and I hope the team do better and move up in the rankings. That was why I had to play. I will do my best under any circumstances if the team wants me to play.”

Noticeably, Ki did not celebrate his goal in the match but just took the ball and ran back to Swansea’s half of the field.

This was probably because he spent last season at Sunderland where he was recognized as a compelling defensive midfielder.

The Dane, who tends to put an emphasis on teamwork with short passes, often included Ki in his starting lineup.

But the relationship between the two suffered when the Korean footballer was suddenly injured at the end of the 2012-13 season.

As he was expected to be out for the rest of the season, Ki hoped to recover in Korea and prepare for the World Cup’s qualifiers. But Laudrup thought that Ki, who had just qualified for a year’s bonus after appearing in the match where he was injured, was neglecting his duties by asking to take time off.

Laudrup then replaced Ki with other contenders during matches in summer 2013 and often left him on bench, so the footballer asked to be loaned to a team that would play him.

The decision to play for Sunderland turned out to be a good one. Ki soon became the team’s starter and greatly contributed to the club being able to stay in the Premier League for another year.

After a year with Sunderland, Ki has become a midfielder any team would want. But he signed with Swansea City for four more years last August, a team that is now under the 36-year-old manager Monk, who was also Ki’s teammate during the 2012-13 season.