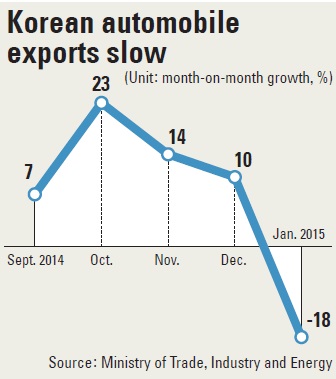 The outlook for Korea’s automotive industry has been looking especially dim in recent weeks, with stiff competition from rival Japan due to the sharp depreciation of the yen and the slump in the European market likely to continue to affect exports.

According to the Ministry of Trade, Industry and Energy on Sunday, annual domestic sales improved in January. By volume, 132,337 units were sold in the Korean market - an 8.5 percent year-on-year increase.

What stands out by comparison is that, in January, local automakers with the smallest market share - Renault Samsung Motor and Ssangyong Motor - have enjoyed strong year-on-year growth largely thanks to the release of new vehicles.

Renault Samsung, which introduced its SM5 Nova, saw sales increase nearly 28 percent year-on-year to 5,739 units, while Ssangyong Motor, which has the smallest market share and recently released its all-new crossover Tivoli, saw a similar jump of 25 percent to 6,817 units.

Even GM Korea and Kia Motors enjoyed a 9 percent and 8.2 percent year-on-year sales increase, respectively. Hyundai Motor, on the other hand, suffered a 2.2 percent drop due to slowing sales of its small models.

Imported cars even showed stronger sales than the Korean brands, as they surged 43.5 percent year-on-year to 21,576 units. This helped nudge up the imported car’s market share further, from 12.3 percent a year ago to 16.3 percent.

The biggest problem, however, is with exports. Even when compared to a year ago, exports of Korean cars fell 2.8 percent last month. This is a turnaround from the 4.9 percent year-on-year increase in December.

In fact, Korean automotive exports have been losing steam over the past three months, which is evidenced particularly when breaking down growth to month-on-month.

Exports surged 23 percent in October, when compared to sales made in September, but that gain decelerated to 14 percent in November and then 10 percent in December.

“Hyundai Motor suffered an 8.4 percent year-on-year drop on its exports as the emerging economy, including Russia, struggles,” the ministry noted in its monthly report.

Compared to the previous month, its exports fell 18 percent.