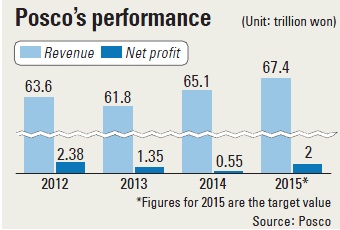 Last month, industry insiders forecast that steelmakers will have a tough year due to unstable exchange rates and falling global demand caused by oversupplies of cheap Chinese products.

But Posco Chairman Kwon Oh-joon doesn’t want to let this happen. Since he took over leadership of the nation’s leading steelmaker in March, he has been trying to focus on the company’s high value businesses to improve its overall efficiency.

To Kwon, the most important task is to keep its financial statements healthy. Kwon has been a steel engineer for 30 years since joining company in 1986, he decided to order the company to focus on new and high-quality products.

His efforts have paid off. Sales of many of the company’s more valuable products increased last year over 2013. Sales of car steel sheets, for instance, were up 13 percent from a year ago and its global sales increased by 54 percent to 7.16 million ton.

As a result, Kwon declared that the company will focus on improving the competitiveness of its products in the global market.

“We aim to sell more than 50 million ton of steel products this year,” he said in a conference on Thursday at Korea Exchange in Yeouido, western Seoul.

“In order to complete that task, we will expand the current 23 global Technical Service Centers to 29 this year and will try to increase the current 33 percent sales ratio for high-value steels to the 36 percent level.”

The company is also speeding up its restructuring. In 2012, Posco Group had 71 affiliates, but the number has been reduced to 46. The company also has plans to sell its LNG Terminal at Gwangyang steel mill and Posco Uruguay.

Since Kwon took over, Posco’s focus on restructuring has helped pull the company through a period of tough competition in the global market. On Thursday it posted its revenue of 65.9 trillion won ($60 billion) on a consolidated basis, a 5.2 percent year-on-year increase, and operating profit of 3.2 trillion won, a 7.3 percent rise over the same period.

“Basically, all affiliates excluding Posco itself could be sold,” said a Posco spokesman. “But we will not rush.”

Chairman Kwon said in January, “We shouldn’t try to earn anything in a hurry from restructuring.”

Posco said it will do its best this year to defend the domestic market from an influx of Chinese products. The market share of mid to low-price Chinese products reached 40 percent last year and a total of 13.4 million tons of steel products was imported from China.

The steelmaker’s secret weapon is a new product called “GS400,” which the company said costs about 5 to 10 percent less than its predecessor, but is better quality. The company’s think tank Posco Research Institute has been studying Chinese products to develop the best strategy to combat its rival’s growing market share in Korea.

The company said it will invest 4.2 trillion won this year, about 1 trillion won less than last year. “We have to improve our financial condition in order to survive from the global crisis,” the chairman added.