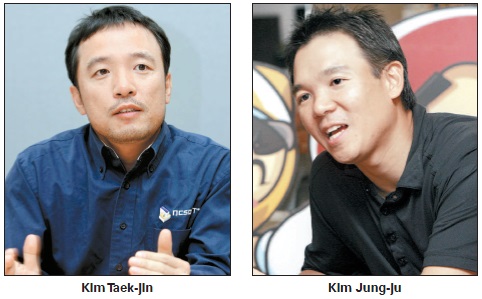 Once close friends and allies, the conflict between Korea’s No. 1 and No. 2 game developers, Nexon and NCsoft, seems to be worsening after a rift that began when the wife of the latter company’s founder and CEO was promoted to its president.

Nexon, whose 47-year-old founder Kim Jung-ju holds the largest stake in NCsoft, gave what many consider to be a final warning on Friday when his company publicly disclosed a message it sent to NCsoft and set a Tuesday deadline for a reply.

Some of the proposals Nexon made include NCsoft accepting an executive the country’s top gaming company plans to announce during a shareholders meeting next month; halting real estate investments while increasing dividend payouts; and disposing of 8.9 percent of its treasury stocks.

Friday’s undisclosed demand comes slightly more than a week since Nexon announced on Jan. 27 that it will exercise its rights as NCsoft’s largest stakeholder.

In the statement, Nexon said it has been given no choice but to act because NCsoft’s share value has been falling as the game developer has failed to quickly adapt to the rapidly changing market in which gamers have moved on from PC to mobile.

But it quickly revealed its true reasons behind the recent feud when it demanded that NCsoft disclose the details of payments given to any nonregistered executives at the company who have special relations with its CEO and who receive 500 million won or more in annual wages.

According to Korean law only registered executives at companies must disclose this information publicly.

The comment was targeted at Yoon Song-yee, NCsoft’s new president and the 40-year-old wife of the company’s CEO and founder Kim Taek-jin, 48. Last month, Yoon was promoted from vice president to president ? a move that majority stakeholder Nexon is apparently not too happy about.

The statement clearly shows that Nexon is unimpressed with the way NCsoft is running its business, as well as its closed corporate governance structure.

The two companies first made headlines in 2012 when Nexon’s Kim Jung-ju purchased the 14.68 percent stake in NCSoft that was previously owned by its Kim Taek-jin for 804.5 billion won. Kim Jung-ju became the majority stakeholder of the company while founder Kim Taek-jin, with a 9.9 percent stake, became the second-largest shareholder.

Yet Nexon said at the time that the stake purchase was solely an investment and that it had no interest in intervening with NCsoft’s management by exercising its rights as the majority shareholder.

The two Kims are well known for their close ties. Both are just a year apart in age and also hail from the same college, Seoul National University.

Kim Jung-ju majored in computer science while Kim Taek-jin graduated from electronic engineering at the prestigious school. Kim Jung-ju was the first to jump into the game development industry when he started Nexon in 1994 and released casual games such as Kart Rider and Maple Story. Kim Taek-jin joined the race with NCsoft in 1997, capturing an older audience with target games such as Linage. Their 30 years of close relations seemed to further deepen from not only with the stake purchase but also their decision last year to start a social contribution business with other leading IT moguls in the country. The project will see both businessmen investing 5.5 billion won for the next five years in various fields, including basic science research.

However, the situation seemed to start souring when Nexon decided to increase its stake in NCsoft from last October. The shares Nexon holds today have increased to 15.08 percent since then, and the company has also been asking to send one of its executives over to NCsoft -- a proposition that the latter company has continuously refused.

Last month, NCsoft decided to promote Kim Taek-jin’s wife, who is considered somewhat a prodigy in the industry. She also bears the title of having been the youngest executive at a Korean conglomerate after she recruited to a top-level position at SK Telecom when she was 28.

She joined NCsoft in 2008 a year after marrying her husband. Since then she has mainly worked on the game developer’s overseas business. In fact, when she was made president on Jan. 23 from Global CSO, the company said she had been promoted to further strengthen NCsoft internationally. Although Yoon struggled with gaining results overseas until 2011, NCsoft’s business in North America has thrived since 2012 with the wide popularity of the game Guild Wars 2.

In a statement, NCsoft responded that it will look into the proposals Nexon has made according to its management philosophy, which is to put the value of its shareholders and customers as its top priority. However, behind closed doors NCsoft executives are not too happy about Nexon meddling in its business.

“It’s the same demand that speculative foreign investments have made on Korean companies,” said an NCsoft official who requested anonymity. “It’s an excessive and emotional management intervention whose own goal is to make short-term profit in the name of shareholders’ value.”

The official also said they felt uneasy about Nexon’s decision to publicly disclose its demands.

“To make a one-sided management proposal while in the middle of negotiation and then release these demands to the press is an act that damages the validity of trust and discussion,” the official added.

The official especially felt that Nexon’s demand to disclose the details of non-registered executives’ paychecks and the reasons behind their payment amount was offensive since even by law this is not applicable. Nexon therefore has no legal rights to make such a demand, which not even the government is asking for, the official said.

Upon receiving the demands from Nexon, NCsoft founder and CEO Kim reportedly said the current situation is a conflict between the overall interests of NCsoft and those of its largest stakeholder, Nexon. He added that the company should focus more on what is best for its overall shareholders rather than one particular shareholder.