Smaller gifts are most popular for Lunar holiday

Smaller gifts are most popular for Lunar holiday 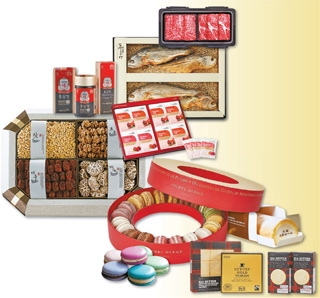 Despite the economy’s decline, Lunar New Year gift sets are winging their way from local retailers.

For Koreans, it has long been a tradition to give presents to one another for major holidays - a custom that even survived the rampant poverty during and after the 1950-53 Korean War when just a few eggs or a bowl of rice were shared.

For each holiday, the most popular gifts reflect the current trends in consumption and the country’s economic conditions.

During the period of famine in the 1960s, for example, a bag of sugar was the most sought-after product.

In contrast, the economy was growing at its fastest pace in the 1980s when the number of specialized gifts on offer at domestic stores expanded to 1,000 different types.

And in 2011, when the local benchmark Kospi exceeded 2,100 points and exports for January posted a record high, expensive gifts such as apples grown in soil sprinkled with gold powder appeared on the shelves.

According to local department stores and large discount store chains, the three keywords for this year’s Lunar New Year gifts are single households, desserts and health.

“It was a very thoughtful gift as I live alone and it is often difficult to get through gifts of food because I normally eat out,” said Lee.

Statistics Korea forecasts that the number of single households will exceed five million this year, or 27.1 percent of all households, up from 23.6 percent, or 4.14 million, in 2010.

These days, one out of four households are single-person homes, which has brought in big changes to the retail market.

Large holiday gifts are now seen as outdated and have been replaced with various small packaged gift sets targeted at single- or two-person households.

For example, Shinsegae Department Store launched a package of two bunches of dried fish for this Lunar New Year.

The fish, which have been deboned for consumers’ convenience, are popular among single households.

The numbers of canned foods and instant meals, which can be stored for a longer period of time and are easy to cook, have also noticeably increased.

At Homeplus, a local large discount store chain, these types of canned and instant foods have grown five-fold to 326 from 65.

The store now also has 325 kinds of seasonings.

These products are growing in popularity among single households who tend to enjoy trying out a variety of flavors little by little.

Due to the prolonged economic downturn, these edible gifts are reflecting the interest in consuming small luxuries as a replacement for expensive designer handbags or watches.

Recently, the Federation of Korean Industries analyzed 600 companies by revenue and found that corporate sentiment has been negative for 10 consecutive months. The amount of household debt has also now exceeded 1,100 trillion won.

However, despite the economic slump, sales of expensive desserts have been growing by more than 10 percent every year.

Although these treats are expensive, with prices ranging between 20,000 won ($18) and 80,000 won, consumers are happy to give them as gifts to one other, local stores say.

“Dessert gifts are sweet, are packaged prettily and are much cheaper than Korean beef or dried fish,” said Son Seong-hyeon, the team leader for manufactured goods at Hyundai Department Store.

“People look for dessert products as recipes by famous pastry artisans and the world’s different dessert cultures are interesting.”


Health foods fly off the shelves

Although health foods are customary gifts for the New Year, red ginseng and a variety of nuts such as walnuts, almonds and pine nuts are especially popular this year as more people are trying to look after their health in an easier and cheaper way.

The Korea Ginseng Corporation, which produces Korean Red Ginseng, sold 4 billion won worth of red ginseng gift sets during the first four days of this month.

Its factory workers have had no time to rest as they are packing an average of 3,200 gift sets per day.

Korean Red Ginseng’s sales are expected to reach 6 billion won by this weekend.

This year, as well as the expensive ginseng essence, there is a variety of red ginseng gifts on offer such as ginseng jelly, ginseng wine and ginseng sweets.

Sales of nuts, which taste good and are convenient to store, have also soared. At local discount store chain E-Mart, the number of nut gift sets has increased 30 percent year-on-year, while preliminary orders for these products have grown 10-fold.

Homeplus has also doubled its kinds of nut gifts from 14 to 27. At local retailers, these options are expected to be in the top five in terms of sales among foodstuffs.

This year, people’s avoidance of pork due to foot-and-mouth disease and the length of the Lunar New Year holiday, which could stretch to up to nine days, have contributed to the popularity of nuts and red ginseng.

However, many experts are saying that the increasing focus on safety, health and family after a string of disasters that spread through Korea in the last 12 months or so is what truly explains the interest in “wellbeing” food.

“Since the Sewol ferry incident, people are especially mindful of their families,” said a product planner at a local retailer.

“Under the unstable employment and the retirement situations, people take care of their health even more and consume health food products.”

According to the Ministry of Food and Drug Safety, the health food market, which was worth 4.9 trillion won as of the end of 2013, is growing by 5 percent every year.