Ancient setting for rituals of Joseon to be restored

Ancient setting for rituals of Joseon to be restored 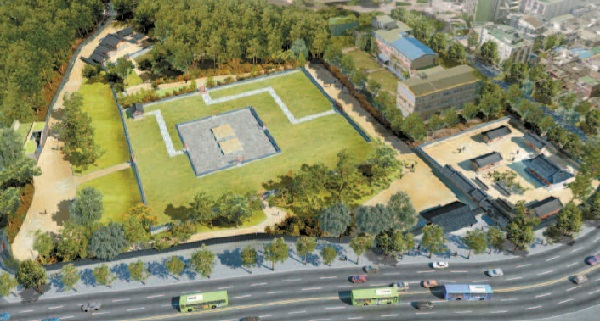 Sajikdan, where Korea’s Joseon Dynasty (1392-1910) held rituals for the gods of soil and grain, will be restored by 2027. Provided by the Cultural Heritage Administration

Downtown Seoul - which centers around Gyeongbok Palace - has been a pre-planned area since the late 14th century when the Joseon Dynasty (1392-1910) chose it as its capital city.

The palace site was picked using traditional geomancy, a philosophy that prefers sites with a mountain in the north and water in the south.

To the east of the palace, Joseon authorities built Jongmyo, a shrine where ancestral tablets are kept.

To the west they built Sajikdan, where they held regular ritual ceremonies praising the gods of soil and grain.

Called “Sajikdaeje,” the regular ceremonies were held twice a year - in February and August.

Occasionally, other ceremonies were also held, like the celebration calling for rain during droughts.

However, compared to Jongmyo, Sajikdan has been largely neglected.

The construction, built in 1395, was demoted to a park by the Japanese during the country’s colonization period (1910-45) after they abolished the Sajikdaeje ritual.

But even after liberation, modern Koreans failed to restore Sakjikdan and focused on city development instead.

It was downsized as a result.

The Cultural Heritage Administration (CHA) confirmed on Jan. 27, however, that it will work to renovate Sajikdan.

The institution gained the management rights for Sajikdan from Jongno District Office in 2012.

“Jongmyo has been preserved and designated as a Unesco World Heritage Site in 1995,” Kim Jae-gil of CHA’s royal palaces and tombs division said.

“Seoul Metropolitan Government in 1985, and the Jongno District Office in 2008 attempted to restore Sajikdan, but their work wasn’t able to [restore Sajikdan fully].”

Until 2027, CHA will use about 16.48 billion won ($15 million) to restore Sajikdan. Officials said they will restore the area to the shape it had in the early 20th century while also restoring its surrounding topography and woods.