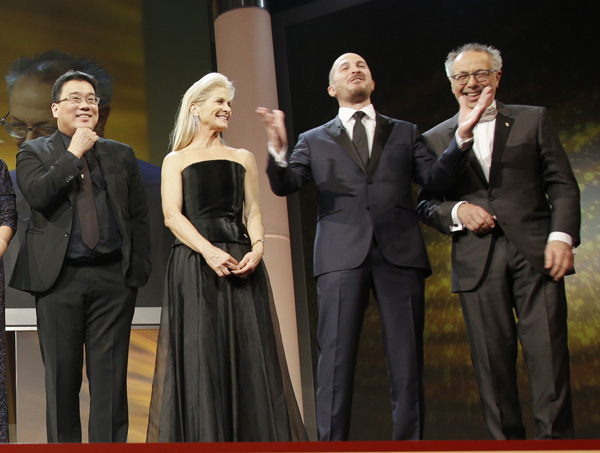 From left: Korean director Bong Joon-ho; U.S. producer Martha De Laurentiis; Darren Aronofsky, this year’s jury president; and Dieter Kosslick, director of the International Film Festival Berlin, appear on stage during the ceremony prior to the opening film “Nobody Wants The Night” at the 2015 Berlinale Film Festival in Berlin on Thursday. [AP/NEWSIS]

BERLIN - After opening with an Arctic adventure, the Berlin International Film Festival heated up Friday with “Queen of the Desert,’’ a film about British diplomat and spy Gertrude Bell starring Nicole Kidman and James Franco.

The film about Bell, who played a key role in reshaping the Middle East during the early 20th century, comes at a time of renewed turmoil in the region. But director Werner Herzog insists it’s just a story, not a history lesson, and doesn’t attempt to criticize those who carved up the Middle East by drawing lines in the sand 100 years ago.

The borders that were drawn - such as those between present-day Syria and Iraq - “had a certain validity, in particular, when we look at today’s attempts to create an Islamic State that has no borders anymore and has Sharia law in its strictest form,’’ Herzog told reporters.

The German director’s refusal to get too deeply into Britain and France’s colonial involvement in the Middle East apparently extended to his leading star.

“I tried to get Werner to give me a history lesson and he was like ‘Nicole, this is too extensive, I cannot do this,’’’ Kidman said.

At least cinemagoers may come away remembering Bell, who wandered across the deserts seeking out tribal leaders and ancient artifacts at a time when few Westerners made any attempts to understand the Arabs.

“I knew nothing about her. That’s partly the reason I wanted to make the film, because I wanted people to know about her,’’ said Kidman. “We talk about Laurence of Arabia, but we’ve never heard of Gertrude Bell.’’

Andrew Haigh’s film “45 Years,’’ which premieres in Berlin, examines what happens when an uninvited guest turns up and threatens to spoil a party - even a guest long dead.

Geoff and Kate Mercer, played by Tom Courtenay and Charlotte Rampling, are preparing for their 45th wedding anniversary when Geoff learns that the body of his former girlfriend, who died in the Swiss Alps 50 years ago, has been found in the thawing ice.

Her memory causes Geoff to re-examine his past and romanticize the life he never had.

In real life, Rampling makes sure to avoid lecturing younger colleagues about how to lead their lives. “I never give advice - until I’m asked for it,’’ she said.

One person who won’t be showing up at the 65th Berlinale is Jafar Panahi, the Iranian director of “Taxi,’’ which is also competing for the festival’s Golden Bear top prize this year.

Iranian authorities have forbidden Panahi from leaving the country since 2010.

So, instead, he takes viewers on a series of taxi rides through the Iranian capital of Tehran in his film.

“It is a kind of humor, it is not a sad movie,’’ said festival director Dieter Kosslick.

“There is a lot of humor, but of course they tackle some problems that you can have in Iran. Jafar himself is the cab driver, so you see him. And actually you see him in a good mood, which is really good.’’

The festival has kept an empty chair for Panahi ever since his government refused him permission to attend four years ago.

“We will keep this until the moment that he comes. Maybe he will take a taxi,’’ said Kosslick.

The film festival kicked off Thursday with the first of 19 contenders for the event’s top Golden Bear honor, a new movie starring Juliette Binoche as the wife of an Arctic explorer.

The premiere of “Nobody Wants the Night,’’ directed by Isabel Coixet, set in 1908 and starring Binoche as Josephine Peary, kicks off a typically varied competition at this year’s first major European film festival.

Set in Greenland, the opening film gets the festival off to a chilly start - though all isn’t what it seems.

Binoche plays the wife of Arctic explorer Robert Peary, heading off in pursuit of her husband as he seeks a route to the North Pole - and ignoring warnings about the onset of winter.