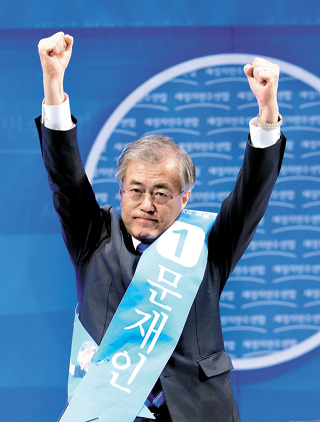 Moon Jae-in throws up his hands in response to his supporters after he was elected Sunday as chairman of the main opposition New Politics Alliance for Democracy at its party convention in Songpa District, southern Seoul. [NEWSIS]

The main opposition elected Moon Jae-in as its chairman at its party convention on Sunday, providing him a second chance to lead the New Politics Alliance for Democracy (NPAD) two years after his defeat in the country’s presidential race.

His victory has significant implications not just for his own political career but also the future of the NPAD. Moon will now be tasked with directing the party’s political objectives into the 2016 general election.

Moon was elevated to the NPAD’s top post over the weekend, winning 45.3 percent of combined votes. His rival Park Jie-won took 41.78 percent, while Lee In-young received 12.92 percent of the votes, coming in a distant third place.

The main opposition elected its new chairman by combining the results of a vote among 10,727 delegates. That includes votes from those who gathered at the convention, held at the Olympic Gymnastics Arena in Songpa District, southern Seoul, as well as overseas delegates who sent in email ballots, which accounted for 45 percent. An opinion poll of senior party members accounted for 30 percent, while an opinion poll of the general public and general party members accounted for 25 percent.

“I will repay you for your support by winning in the general elections [next year],” Moon said in his acceptance speech. In his address, he also hinted that he would be a tough-minded leader - an apparent jab at the Park administration - and threatened an all-out confrontation with the ruling government if it continued to “undermine the principles of democracy and the middle-class economy.

“Let’s take a journey together toward victory in the general election and take back the Blue House,” he said.

Moon’s victory signals his comeback in the political sphere two years after his failed presidential run.

But the stakes for the former opposition candidate are larger now than ever, and failing to win over public trust in the main opposition and bridge the divisions in his fractured party could effectively extinguish any hopes for a Saenuri defeat in the general elections next year, let alone a second presidential bid.

Fully aware of the risks and their potential detriments to his political career, Moon acknowledged he would have three near-death challenges as the NPAD’s new leader.

“I will be of no use in politics if I fail to become party leader, or fail to revive the party, or fail to win in the general elections,” said Moon in a speech before voting kicked off on Sunday.

During his campaign, the former human rights lawyer promised that he would revive the main opposition and retake the Blue House, which the NPAD has now lost for two consecutive terms to former President Lee Myung-bak and incumbent Park Geun-hye.

During the race, Moon cautioned that his party would be swept by the ruling Saenuri Party in the general election next year if it maintained the status quo and declared he would introduce sweeping changes within the dysfunctional party as chairman.

Nor did he shy away from making clear that he is the best presidential frontrunner the main opposition has had in two years, citing a public approval poll that put him ahead of other lawmakers as a possible candidate.

“Who has the most potential to win in the next election for president?” Moon asked in a fevered pitch in his speech before some 10,000 party delegates.

“Who ranks as the No. 1 candidate for the next president in a poll?” he continued.

He also stressed on Sunday that confronting the Park government over its economic policy would be his priority as the NPAD’s new leader.

“We need to come up with a justified taxation system by normalizing [the current one], which offers tax breaks to the wealthy while imposing more on ordinary Koreans. I will put economic policy at the forefront and win over the Park government.”

While many in and out of the party anticipated Moon’s victory on Sunday, it did not stop him or his party rival, Park, the former presidential chief of staff for the late Kim Dae-jung, from engaging in an intense bout of mudslinging. Park did not hesitate to hit hard and was infuriated at Moon’s camp, going so far as to call the newly elected chairman “incompetent” and exclaiming that he “played dirty.”

But more than anything, their hard-fought race only exposed raw divisions within the main opposition, which has led to concerns among its supporters over the party’s unity.

In what many saw as a testament to such deep infighting, Park ran his campaign largely on the threat that his defeat to Moon would likely cause the NPAD to split in two.

His commentary was a direct reference to the in-party rupture between loyalists to the late Roh Moo-hyun, whom Moon essentially leads, and the lawmakers who are not.

“I will not replay the divisions displayed during the race. I will quell rumors about in-fighting among different factions by carrying out transparent and fair personnel appointments for the party,” Moon said in a press conference following his victory.

With the former presidential candidate now poised to take the helm of the country’s largest opposition party, eyes are now on which way Moon will direct the NPAD, particularly with two major elections coming up.

The public approval rating for the NPAD, which commands the loyalty of 130 lawmakers, has risen more than 10 percentage points since September, reaching 27.5 percent last month, according to a poll by Realmeter.

Many attributed the party’s increased popularity to the leadership of former interim NPAD Chairman Moon Hee-sang, who was widely praised for his soft leadership style.

The first test of Moon’s leadership will come on April 29, when by-elections for three parliamentary seats now vacant following the dissolution of the leftist Unified Progressive Party will be up for grabs.