Bird flu reaches Seoul; first time in over a decade

Bird flu reaches Seoul; first time in over a decade 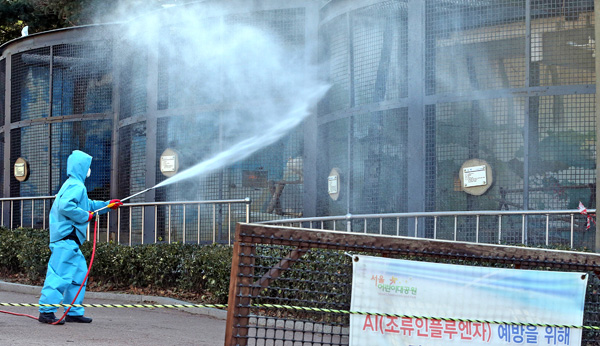 An employee sterilizes bird cages at Children’s Grand Park in eastern Seoul on Sunday to prevent avian influenza infection. A highly pathogenic strain of the disease broke out in the outskirts of Seoul in December and was recently confirmed to have entered Seoul for the first time since 2003. By Kim Seong-ryong

A highly pathogenic strain of avian influenza (AI) has reached Seoul for the first time since the disease was initially reported in the country in 2003, according to the city government, which is scrambling to come up with measures to keep it from spreading further.

Particular focus is on the nearby zoo at Children’s Grand Park.

Quarantine authorities announced that feces samples collected from along the Jungnang Stream, which runs down from the northeast to central Seoul and joins the Han River, were confirmed to be contaminated with the H5N8 bird flu strain.

On Saturday, the Seoul Metropolitan Government held an emergency meeting, where it decided to strengthen its quarantine measures to prevent further spread of the disease.

The city government immediately closed trail entrances along the stream where the samples were found and set up detours.

The authorities also stepped up preventive measures, sterilizing the area where the samples were collected twice a day and increasing the number of places to gather specimens from 12 to 21.

Employees are sterilizing the zoo twice daily. It is also requiring that all visitors pass through a tent, where they are sprayed with a sterilizing agent, before entering.

Bird farms have also been shut down and cages covered to prevent droppings from infecting the site.

“Given that highly pathogenic AI was found in the feces of wild birds, we are planning to take preventive measures along the Han River and Anyang Stream,” said Kang Jong-pil, the chief of the Health and Welfare Bureau under the city government.

“Residents don’t need to be concerned since no person has ever been infected with AI in Korea, but we recommend they refrain from entering trails along the Han River or its tributaries.”

Until now, the closest the virus got to the capital city was Mount Cheonggye in Gwacheon, Gyeonggi, in March last year, when the carcass of a migratory wild goose was found to be infected with the virus. The Seoul Zoo, next to the mountain, was forced to provisionally close for nearly two months to prevent the disease’s spread.

AI was first confirmed in the Seoul metropolitan area at the end of December at Moran Market in Seongnam, Gyeonggi - about nine months after the carcass was found on Mount Cheonggye.

After confirmation, quarantine authorities shut down the market for about a week and culled 3,200 chickens and turkeys, but the virus nonetheless managed to reach Seoul.