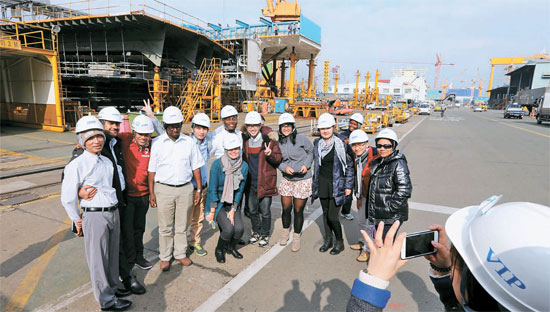 Students from 14 developing countries take part in a field trip to the Okpo shipyard in Geoje, South Gyeongsang. The students are participating in a two-year Koica-backed program at the School of Finance and Accounting at the Korea Advanced Institute of Science and Technology (Kaist). By Song Bong-geun

Owned by Daewoo Shipbuilding and Marine Engineering (DSME), construction of the shipyard began in 1973 and lasted until 1981. The facility, at 4.3 million square meters (1.6 square miles), played a pivotal role in producing ships and making Korea one of the leading shipbuilding countries in the world.

Hugging the bus windows, the students stare at the 900-ton cranes and cutting-edge shipbuilding facilities.

The visitors from 14 Asian and African countries - including Pakistan, Iraq and Ghana - were selected to come to Korea in 2012 as part of a program to train manpower from developing countries organized by the Korea International Cooperation Agency (Koica). Before coming to Korea, they were public officials working at the central banks or finance institutions in their countries. Now they are studying at the Graduate School of Finance and Accounting at the Korea Advanced Institute of Science and Technology (Kaist).

A visit to the shipyard was the idea of Hong In-gi, a professor at the College of Business at Kaist. Since the students came to Korea in 2012, Hong has brought them to a different industrial site every winter break. The shipyard trip is their fourth such visit.

In 1960, when Korea was a developing nation, Hong got the chance to study economic development in the industrialized West.

“I was selected as a scholarship student by the Swiss government in 1961,” Hong recalls. “Back in those days, I was given a chance to inspect a watch factory and a chocolate factory. I vividly remember how I was surprised to see all the well-equipped facilities in those factories.”

For Hong, touring the students around the shipyard is a particularly thrill because he was CEO of DSME from 1978 to 1983.

After getting off the bus, the students toured a building dock built in the 1980s. Hong explained that the dock is as big as eight soccer fields, and six ships, such as drill ships or submarines, can be built in the dock at the same time.

“It’s impressive that in just 30 years Korea has become a country with the leading shipbuilding techniques,” said Nakitende Anna, who worked at a government-run bank in Uganda before coming to Korea on the program.

In the afternoon, Hong took the 16 students to the Korea Exchange (KRX) in Busan, the sole securities exchange operator in Korea, to tell them something about the history of the institution. Hong told the students that KRX has relationships with overseas exchanges in such countries as Cambodia and Laos. “In the case of Pakistan, it seems we have resources and capital but lack financial expertise,” said Chandio Nadeem Akhtar, who worked at the Board of Investment, the Pakistan government’s investment promotion agency. “I feel like our government needs to quickly introduce Korean financial techniques.”