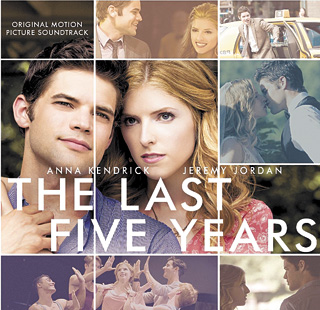 Hollywood went to two actors with Broadway backgrounds to star in the film version of the musical “The Last Five Years’’ - and it paid off.

Anna Kendrick and Jeremy Jordan star as a young New York couple who fall in, and then out. She’s a struggling actress. He’s a writer who finds success. Both Kendrick and Jordan have Tony Award nominations on their resumes, and they have perfect voices for the sometimes emotional lyrics, which trace the couple’s relationship in an inventive way.

Two-time Tony winner Norbert Leo Butz and Tony nominee Sherie Rene Scott are previously best known in the roles, featured in the 2002 off-Broadway cast recording of Tony winner Jason Robert Brown’s show. Now Kendrick and Jordan take the reins in a more richly produced soundtrack that keeps the theater feel. The soundtrack keeps all the production’s songs, some bright and bubbly and others sad and somber. Kendrick and Jordan let the emotions come through their singing voices. “The Last Five Years’’ isn’t a show filled with catchy tunes, but it does want to take you through thoughtfully written songs that tell the story of all of the emotions that go into a relationship. Let them. AP