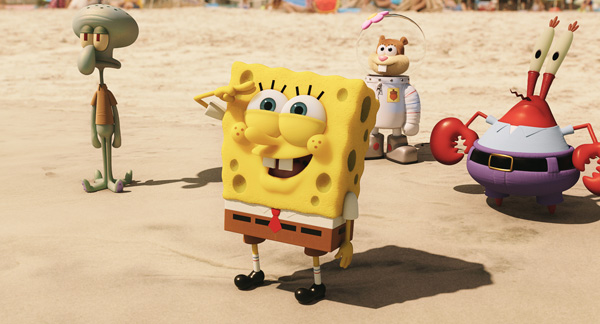 From left: Squidward Tentacles, SpongeBob SquarePants, Sandy Cheeks and Mr. Krabs in a scene from “The Spongebob Movie: Sponge Out of Water.” [AP/NEWSIS]

Paramount Pictures’ “SpongeBob Movie’’ earned $56 million in North America, a huge debut for the animated Nickelodeon big-screen transfer, according to estimates Sunday. That finally pushed “American Sniper’’ off the top spot after a three-week reign. The Navy SEAL drama took in $24.2 million in its fourth week of wide release.

That gave the box office a couple of lucrative hits and a pair of costly misses to lead the early February weekend.

The success of “The SpongeBob Movie,’’ the second SpongeBob film following 2004’s “The SpongeBob SquarePants Movie,’’ proved the continuing appeal of the 16-year-old Nickelodeon character. The colorful, beach-set cartoon about the relentlessly chipper SpongeBob also capitalized on a marketplace hungry for family films in the midst of winter, well after the swath of holiday releases. On the same weekend last year, Warner Bros.’ “The Lego Movie’’ emerged as one of 2014’s biggest hits.

“This movie played a little bit older than we initially thought it would,’’ said Megan Colligan, president of worldwide distribution and marketing for Paramount. “It’s a real tribute to Nickelodeon and ... how well they manage the brand. It’s a beloved character that teenagers love from their childhood.’’

“There’s no question, at its inception when the movie was greenlit, we had higher expectations than what the actual result is,’’ said Jeff Goldstein, head of domestic distribution for Warner Bros. “At the end of the day, the Wachowskis are fine filmmakers. This one didn’t go quite as broadly as we all wanted.’’

Warner Bros. could take solace in the tremendous success of the Oscar-nominated “American Sniper,’’ however, which will cross $300 million by next weekend. Whereas “Sniper’’ paid off many times over, “Jupiter Ascending’’ will be costly.