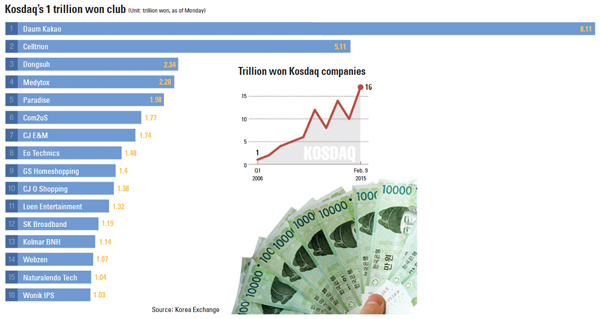 While the Kospi main bourse is having trouble returning to the 2,000 level, the tech-heavy secondary Kosdaq market has been making steady and solid upward momentum, reaching 600 points for the first time since June 2008.

And as of Friday the Kosdaq’s market capitalization reached an all-time high of 161.9 trillion won ($147.8 million).

Thanks to the upward momentum, 16 companies were in the 1 trillion won in capitalization club on the junior market as of Monday. That’s six more than in the first quarter of 2014. On Friday, there were 17, but a few changes were made after the Kosdaq lost 10.38 points or 1.72 percent over the week.

In addition, most game shares, including Gamevil, fell Monday. The company’s shares plummeted to near the daily limit, losing 14 percent. That resulted in Gamevil being bumped from the 1 trillion won club on Friday.

“There’s growing expectation of more active investments from foreign and institutional investors as the number of companies with 1 trillion won or more market capitalization has been growing,” said Bae Sung-young, senior analyst at Hyundai Securities. “We have seen steady stock purchases by foreign investors on the Kosdaq since 2013.”

The common trait of 1 trillion won members is they are companies with strong growth potential, rather than well-established businesses.

For example Daum Kakao, although the No.1 mobile messenger app company in the country, has been had wide interest from investors over its business expansion into the financial technology, or fintech, industry. SK Securities, in its analyst report this week, advised investors to take note of Daum Kakao, adding that the tech company’s stock will likely benefit from government policy.

Bae of Hyundai Securities said there is growing interest in cosmetics and entertainment stocks as Chinese consumption of Korean beauty and bath products as well as entertainment has been increasing.

“We need to take notice of how the 1 trillion won club companies on the Kosdaq are showing better growth than blue chips on the primary Kospi,” the analyst said.