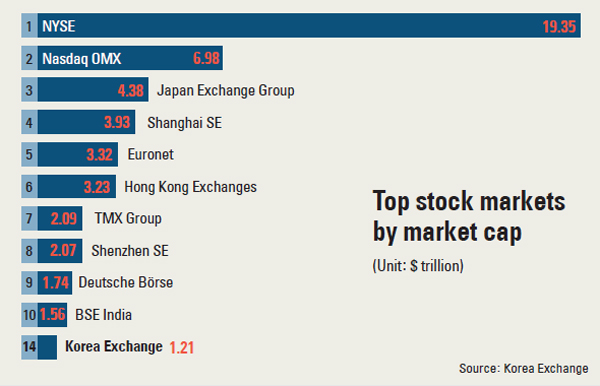 Although Korean indices weren’t the only ones struggling, the market capitalization of stocks on both the main Kospi bourse and the secondary Kosdaq shrank on the global scale.

According to Korea Exchange, the total value of the world’s stock markets last year was $63.5 trillion, which is a 5.6 percent year-on-year increase.

This is the sharpest increase in the global market since 2003.

On the contrary, Korean stock markets retreated 1.8 percent to $1.2 trillion won. At the end of last year, the two Korean indices by market capitalization accounted for 1.91 percent of the global market, which puts the country at 14th.

Last year, the Kospi struggled to gain momentum. It saw a slight improvement in the months after Saenuri Party leader Choi Kyung-hwan was appointed as finance minister and deputy prime minister for the economy in July.

To revitalize the economy, Choi pushed for aggressive deregulations and economic support policies, including larger liquidity supply in the market.

For the next couple of months, the Kospi responded, staying above 2,000 until the end of September.

While the Korean stock market fell, the U.S. market continued to thrive, particularly in the second half as the economy recovered.
Compared to 2013, the New York Stock Exchange saw its market capitalization increase 7.8 percent to $19.35 trillion won. It took the top spot with more than 30 percent of the global market share.

On the contrary, European stock markets were worse off than Korea, including Germany’s Deutsche Börse. Its market capitalization shrank by 10 percent.