Delivery drones successful, but not practical

Delivery drones successful, but not practical 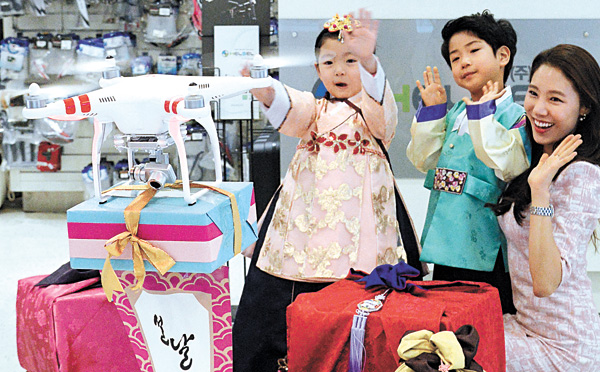 Customers at Hyundai I’Park Mall in Yongsan District, central Seoul, watch a drone carrying a package around the hall. Drone delivery has yet to be commercialized in Korea.[NEWSIS]

On Friday at 3 p.m., shoppers walking through the seventh floor of Hyundai I’Park Mall in Yongsan District, central Seoul, were stopped in their tracks by the sound of propellers humming.

They then saw a drone flying overhead carrying gifts for the Lunar New Year. The drone flew around for about 10 minutes before making a flawless landing on a designated landing pad. The shoppers standing around shouted and cheered at the drone’s successful delivery.

The drone used in the display was the Phantom 2 Vision +, the same model that gained global attention after it crashed on the White House lawn last month. The device, made by Chinese drone manufacturer DJI, costs about 1.5 million won ($1,400). Equipped with a 5,200 milliampere-hour lithium polymer battery, it can fly for about 25 to 30 minutes, and can be linked to a smartphone to transmit videos from its camera.

Hyundai I’Park Mall, run by Hyundai Development Company, said that it will use the drone to deliver promotional packages at demonstrations ahead of the Lunar New Year holiday.

“Because customers’ interest in drones is increasing, we decided to hold a special event to deliver packages by drones,” said Song Tak-geun, who is part of I’Park Mall’s culture team. “When a new swimming pool opens at the mall, we can also use the drone to throw inner tubes to swimmers when there’s an emergency situation.”

Although I’Park Mall has shown that drone delivery is expanding in the local market, experts doubt that they will succeed in Korea because of regulations and technical barriers.

For example, there is a limit to how much weight a drone can carry. The model used by I’Park Mall can only carry about 500 grams (one pound). If the package exceeds 500 grams, the drone will not be able to fly.

“We could carry bigger packages if we had a big drone that costs more than 10 million won, but still, the capacity would be very small compared to other air or ground delivery services,” said Jeon Jin-pyo, a manager at local drone company Helsel who flew the drone at the I’Park demonstration.

Industry insiders point out that drone delivery will be especially difficult in an area like Seoul, where apartment building are crowded together. In addition, since drones sold locally are not technologically sound enough to avoid “unexpected barriers” during flight, safety concerns are an issue.

“About 70 percent of the nation’s package deliveries are concentrated in the Seoul metropolitan area and since there are so many apartments, delivering packages via drone is almost impossible,” said a spokesman at a local logistics firm who requested anonymity. “We could probably adopt drone services in rural areas, but nothing is currently being considered.”

In fact, although there is a movement to ease regulations, the Ministry of Land, Infrastructure and Transport only allows drones to be operated for safety and security reasons in designated areas.

However, drones are expected to be widely used in agriculture in Korea. According to Helsel, it is developing a drone that can spray 10 kilograms (22 pounds) of agricultural chemicals during a 30-minute flight. The drone is expected to be for sale in the second half of the year.