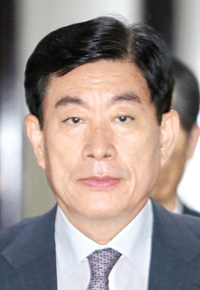 Overturning an earlier acquittal, an appeals court Monday convicted a former intelligence agency chief on charges of meddling in the 2012 presidential election in support of Park Geun-hye, the ruling party candidate at the time.

The Seoul High Court convicted Won Sei-hoon, who headed the National Intelligence Service (NIS) from 2009 to 2013, on charges of violating the election law, effectively ruling that the country’s highest spy agency had meddled in the presidential election.

The court also upheld an earlier conviction that Won breached his responsibility to be politically neutral when he ordered a group of agents to operate a cyber campaign on the eve of the election to smear Park’s opponent, Moon Jae-in.

The ruling is expected to reignite the controversy surrounding the legitimacy of Park’s presidential victory. It also came as Moon was elected as the new leader of the main opposition party on Sunday and declared his fight against the Park administration.

The high court on Monday handed down a three-year prison term and took Won into custody at the courtroom immediately after the sentencing. Won evaded a jail term in the initial trial, which took place at the Seoul Central District Court in September 2014, because his prison term of two and a half years was suspended over a four-year probationary period.

While the district court turned down the prosecution’s argument that the online posts by the agents were a form of election campaigning, the high court accepted the case.

“The upload of posts online by a team of psychological warfare agents, carried out after Park was elected as the presidential candidate for the Saenuri Party in August 2012, is seen as election campaign activity that has an influence on the victory or defeat of the candidates,” the Seoul High Court stated in its ruling against Won.

The court also ruled that the 117,000 comments posted by the NIS via 175 Twitter accounts and 117 Internet bulletin boards were in violation of not only the laws governing the spy agency but also the election law.

During the initial trial, the Seoul Central District Court said the Internet posts were part of the team’s routine activity and there was no evidence that it was akin to election campaign activities. Days before the presidential election on Dec. 19, 2012, the Democratic Party, the predecessor to the main opposition New Politics Alliance for Democracy (NPAD), claimed that certain government offices, including the NIS, had run an Internet smear campaign against Moon.

The scandal was fueled further when the police announced the results of their initial probe and cleared the NIS on Dec. 16, just three days before the election. Moon was narrowly defeated by Park.

After the election, the police reversed their initial findings and said some NIS workers had operated a cyber smear campaign against Moon and recommended that the prosecution should indict them.

Prosecutors re-investigated the case, raided the NIS and indicted five people, including Won, in June 2013.