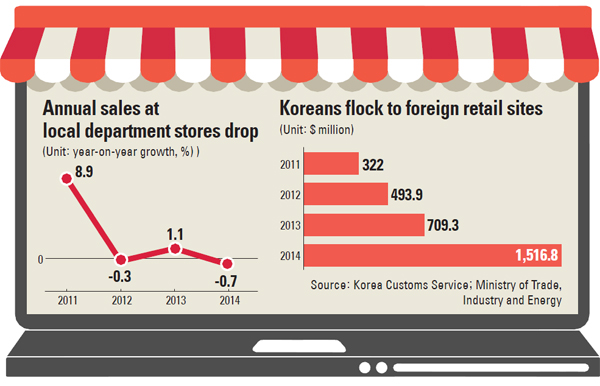 The Korean government on Monday indicated that it intends to boost support for the struggling local retail industry, with more consumers gravitating toward cheaper products and services offered at foreign shopping malls.

The goal is to reverse direct overseas purchases by Korean consumers by opening new outlets abroad to help local retailers attract more consumers in foreign countries like Vietnam and China, where demand for Korean products has grown.

Establishing an infrastructure that could improve the delivery of Korean goods to neighboring countries while easing export regulations and arranging partnerships is key, Korea’s trade minister said.

“Improving the e-commerce business environment will be a huge help to local small and midsize manufacturers in increasing sales,” said Yoon Sang-jick, the minister of trade, industry and energy, who attended a meeting that included export-related government agencies and CEOs from online-market companies, among others.

The meeting was organized to discuss measures to support Korean retailers.

“The world’s largest Chinese market has opened with a bilateral free trade agreement,” Yoon added. “I hope to see local manufacturers and retailers make the best use of the infrastructure.”

One of the proposals included the launch of a ferry route between Incheon and Qingdao in June. Once this route is opened, the government said it expects shipping costs for small Korean manufacturers to the neighboring Chinese market to reduce by at least 30 percent.

Additionally, in an effort to encourage companies to engage more actively in e-commerce exports, the government has decided to recognize small shipments sent to overseas markets targeted at individual foreign buyers as official Korean exports.

This will allow export retailers to be eligible for surtax return benefits, which were previously unavailable. Related changes to those regulations will be made by June.

The Trade Ministry added that it will help some 1,500 Korean small and midsize manufacturers to promote or sell their products on major global e-commerce websites, including Amazon and eBay, by the end of the year.

The Small and Medium Business Administration proposed offering assistance to create a brand website and digital catalogue in multiple languages.

So far, language was just one of the chronic hurdles Korean retailers encountered. Large open markets like Gmarket and Interpark opened their own foreigner-friendly malls, though small manufacturers and retailers supplying products were unable to provide proper product descriptions in other languages.

Through these new policies, the government hopes to post 700 billion won ($639 million) in exports via online e-commerce - a figure significantly higher than estimated exports worth 44 billion won last year.