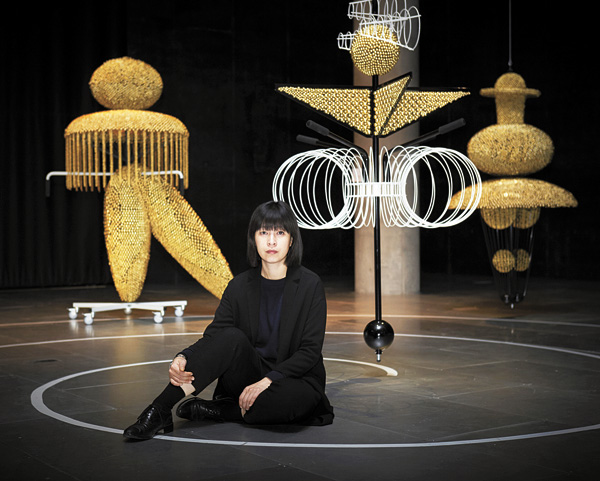 Artist Haegue Yang poses with her work “Boxing Ballet,” a group of sculptures inspired by the outfits for “Triadisches Ballett (Triadic Ballet).” The series is part of the Germany-based Korean artist’s solo exhibition, which starts Thursday at the Leeum, Samsung Museum in central Seoul. Provided by the museum

Haegue Yang, 43, is known as one of the most successful Korean artists internationally, but her highly conceptual pieces are some of the most difficult to understand.

The artist’s first solo show here in five years will start at the Leeum, Samsung Museum of Art in central Seoul Thursday. The exhibition is a sort of retrospective, as 35 sculptures and installation will be put on display.

These will include “Storage Piece” (2004), an early installation; “Cittadella”(2011), one of her works using venetian blinds, which brought her international fame; and “The Intermediates” (2015), a series she will unveil for the first time.

The exhibition is called “Shooting the Elephant, Thinking the Elephant,” although visitors will find it difficult to find anything literally associated with the name within the show.

“Cittadella”(2011), left, one of Yang’s pieces consisting of Venetian blinds which brought her international fame, and the new works she unveiled for the first time, “The Intermediates.”(2015), right, are also part of the solo show.

“The elephant appears as an invisible medium, extremely vulnerable like endangered nature, but also powerful as our human imagination and aspiration,” explained Tae Hyun-sun, curator of the exhibition.

“Maybe the elephant is me,” Yang said.

“Cittadella,” an installation that consists of 186 Venetian blinds hanging from the ceiling, moving spotlights and scent emitters has been placed in the Leeum’s Black Box section,

In Yang’s signature style, the work is a kind of abstract, artificial dark forest, as the blinds that overlap in different ways according to the viewer’s location throw dizzying combinations of light and shadows, while various aromas come from the emitters.

A group of sculptures titled “Boxing Ballet” are placed besides “Cittadella.” The pieces are inspired by the outfits for “Triadisches Ballett (Triadic Ballet),” which were developed by German Bauhaus painter and choreographer Oskar Schlemmer (1888-1943).

The geometric outfits made for the ballet in which dancers perform with motions intended to resemble those of machines or robots have been re-created by Yang as sculptures fully covered with numerous brass-plated bells.

When moved they make an unexpectedly loud sound, which will remind Korean viewers of the bells used by mudang, or traditional Korean shamans. This primitive noise contrasts strangely with the shapes of the sculptures, which Schlemmer originally designed to reflect abstractness.

The “Intermediates” series (2015) in the Ground Gallery have an anthropological tone. The sculptures are made of artificial straw using an old craft technique. Some recreate a particular country’s cultural heritage. Others are new creatures the artist has come up with based on a mix of ethnic and modern cultures.

“These architectural and anthropomorphic synthetic straw-crafted sculptures address the particularity [folk] and universality [civilizational] of cultures, blurring the boundaries between established traditional concepts and hybrid, even alien, and unfamiliar migratory strands,” Tae said,