More retirement savers decide to sacrifice some stability for returns

More retirement savers decide to sacrifice some stability for returns

Lee Hae-dong, 35, a corporate employee in his seventh year, recently switched from a fixed time deposit for his retirement savings to an equity fund because of the low interest rate. Lee’s anxiety grew as he heard news reports that people in their 30s and 40s might not be able to afford retirement.

After serious consideration, Lee chose a riskier fund run by KB Asset Management, dubbed KB Retirement Pension Dividend 40 Fund, thinking it would be better to make an aggressive investment even if it carried some risk.

“As I read newspapers saying the interest rate of time deposits has fallen to about 1 percent, I couldn’t continue keeping my money there,” Lee said.

According to FnGuide, a financial information provider, the total amount of money invested in retirement pension funds stood at nearly 5.77 trillion won ($5.3 billion) as of Jan. 2. 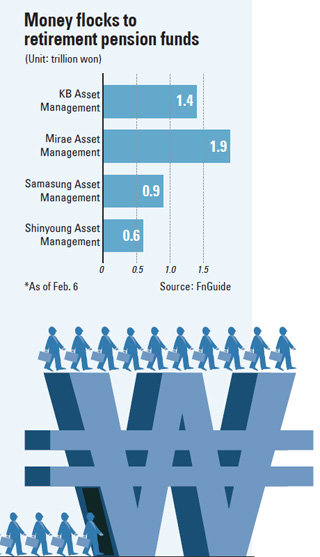 This year alone, more than 900 billion won was added, reflecting the rapid growth of the market.

“Employees who used to be managing their funds conservatively for retirement are now moving to funds that invest in stocks because they are concerned about the low interest rate,” said Cho Yong-ho, head of the retail division at KB Asset Management. “Given the low-interest rate policy, the trend is expected to continue for a while.”

Retirement funds are dividend products whose yields can differ according to investment performance. Employees invest money they have in retirement pension accounts subscribed by employers. From this year, the government offers a maximum tax deduction of 13.2 percent on up to 3 million won in such accounts.

Experts advise employees to choose funds that will have a stable yield over for a long period.

As the number of retirement pension funds that are newly launched increases, the stability of the funds varies widely. Some of them are as large as 1 trillion won or more, while others are just billions of won.

As of this month, the KB fund is said to be the most profitable. The fund’s most recent one-year yield was 13.12 percent, and over the past seven years the fund amassed 87.4 percent in yields.

Thanks to the high yields, the fund has attracted more than 100 billion won this year alone. The fund restricts investment in stocks to 40 percent in order to seek stabilization. The stocks are carefully selected based on market capitalization, competitiveness and type of company. The fund also invests in bonds of healthy corporations.

“Our team develops products that are tailored to customers’ needs in accordance with retirement trends,” said a manager at Samsung. “We are increasing marketing activities.”

As many individuals are seeking higher yields, cash is flowing backing into money market funds, too.

According to the Korea Financial Investment Association, the total amount of money invested in money market funds stood at 101.82 trillion won as of Feb. 5, up from 82 trillion won in Dec. 31.

Because of low interest rates and the sluggish performance of the Kospi, short-term funds are flocking to money market funds, said Oh Gwang-young, a researcher at Shinyoung Securities.