Overseas construction orders up in January

Overseas construction orders up in January 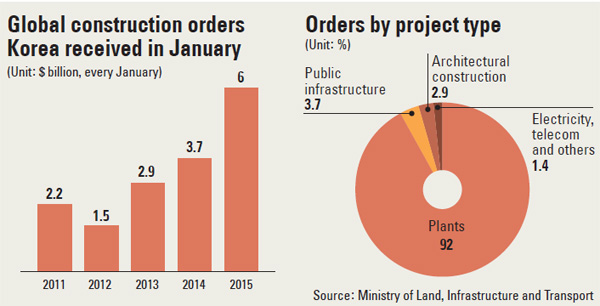 Korean builders are looking for ways to boost their overseas orders despite low international oil prices.

According to the Ministry of Land, Infrastructure and Transport on Tuesday, Korean builders received a surprising amount of orders in January amounting to $6 billion, which was a 61 percent increase over January 2014.

“This year marks the 50th anniversary of Korean builders going overseas,” said Song Seok-joon, head of the construction policy division at the Land Ministry. “This year, overseas projects will keep leading the Korean construction industry, and our focus will be on obtaining more value-added projects in both architectural construction and plants.”

The largest contributor to the success was emerging economies in Central and South America and Southeast Asia, accounting for 98 percent of all orders last month.

Of the $6 billion orders, 64 percent of the projects amounting to $3.85 billion came from Central and South America, while the remaining 34 percent, worth $2 billion, came from Southeast Asian nations.

Almost 92 percent of the orders were for factories. Among the most notable projects, GS E&C will build a gas processing plant worth $2.6 billion in Venezuela. Doosan Heavy Industries won a $1.65 billion project to build a coal thermal power plant in Vietnam.

Emerging economies are taking over as Korea’s new customers, as orders from builders’ traditional markets in the Middle East amounted to just $28 million due to low oil prices.

“This year’s overseas construction market will still be rosy despite uncertainties in the global economy,” the Land Ministry said in a statement. “We will help our private builders by easing rules and creating opportunities in the emerging economies.”

Analysts forecast that the overseas market this year will be a significant source of expansion for Korean builders, which have been struggling amid sagging domestic demand.

“The sheer size of overseas project orders will keep rising this year due to construction demands from emerging economies in Central and South America and Southeast Asia, especially from Pacific countries,” said Yoo Wi-sung, a senior researcher at the Construction Economy Research Institute of Korea.

“With the emerging economies taking the lead in expanding the worldwide construction market, Korean builders still have opportunities even with low oil prices and the weak yen.”