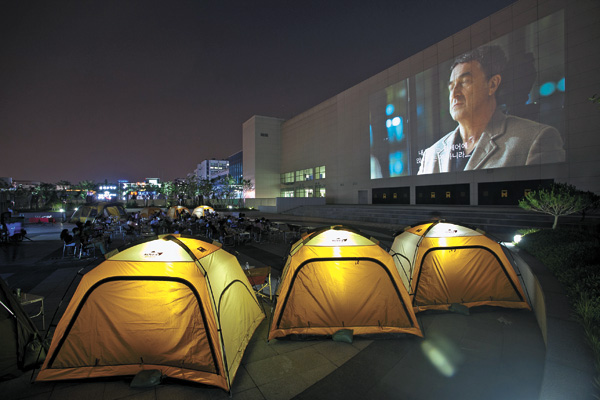 Open M adopted the recent camping trend in Korea in order to allow people to watch a movie in the open air. Provided by Megabox

Korean theaters are taking the cinematic experience to the next level by allowing viewers to play, eat and relax before or while they watch the latest blockbuster.

Dozens of kids and grown-ups lined up to use them.

“We wanted to add vitality to the long waiting time before the movies start,” said an official of the nation’s third-largest theater franchise.

“Also, kids sometimes get bored of the movie’s long running time, so the slides can liven up their theater experience before and after the film.”

The unexpected installment of the slides, which are now also at the Baekseok Megabox in Ilsan, Gyeonggi, pinpoints the latest trend in which local theaters are acting as one-stop cultural destinations providing unique services.

Last summer, Megabox tapped into the camping trend in Korea and installed an outdoor theater on the rooftops of two of its branches in Ilsan, Gyeonggi, under the name Open M. 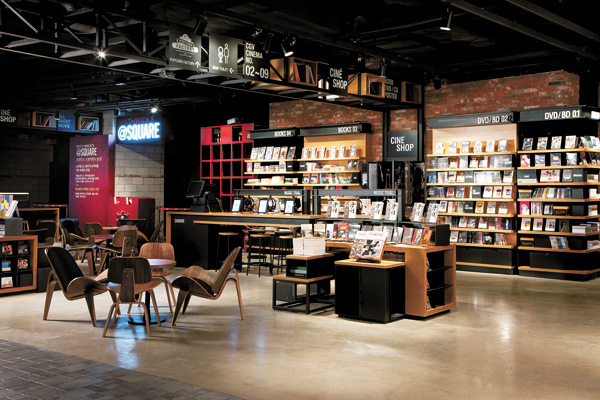 CGV’s Yeouido branch is home to the Cine Shop, which sells products or souvenirs related to movies such as animation figures, books and DVDs. Provided by CGV

The program, which reopens for the summer this May, enables visitors to camp and watch movies at the same time.

While Megabox concentrated on diversifying its movie-watching format, CJ CGV, the nation’s largest theater chain, incorporated various forms of cultural activities such as fine art, photography and music in order to liven up the theater experience.

For example, when art-house film “Mr. Turner,” which chronicles the life of artist William Turner, opened in local theaters last month, CGV decided to introduce 11 prints of the late English painter’s famous artwork at the theater’s lounge to help the audience engage more deeply in the film.

“By exhibiting the real work of the film’s protagonist, we aim to get the audience more immersed in the film and understand it more profoundly,” said Park Ji-ye, a manager at CGV Arthouse, a CGV theater dedicated to art-house and indie films in Apgujeong, southern Seoul.

Currently, 10 images taken by Sebastiao Salgado, a Brazilian photographer who is the protagonist of documentary “The Salt of the Earth,” are on display at the venue.

The film opens in local theaters on Feb. 26. 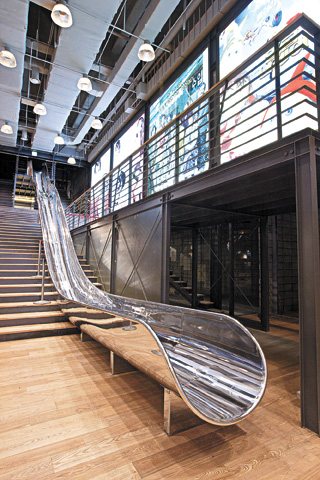 Two gigantic play slides were installed at Megabox Coex last December to add to visitors’ theater experience. The slides are popular among kids who sometimes get bored during movies with a long running time, according to a company representative.Provided by Megabox

If cinemagoers make it in time, they can catch local indie bands busking at CGV’s Yeouido branch in central Seoul.

As well as these performances, which are designed to lure in passersby, the theater also has a souvenir shop in one of the corners of the venue. The shop sells products inspired by the films it is showing, including animation figures and original books or films that some of the movies screening are based on.

Rather than sticking to traditional butter popcorn, hot dogs or dried peanuts, companies such as Lotte Cinema, the nation’s second-largest cinema chain, are expanding their range.

Lotte launched Snack# last month at a branch in Suwon, a bar focusing on instant snacks and fast food that people can easily consume while watching movies.

Its main item is its L-bread, coin-sized custard cream-filled treats that are baked on the spot so the customer can enjoy them while they are still warm.

On the other hand, CGV is focusing on giving a more diverse choice of popcorn.

In addition to the usual butter and caramel popcorn types, the theater offers 12 more flavors ranging from salty bacon and cheese to sweet banana and mango.

Some of the country’s multiplexes have also undergone luxurious transformations, adding a new dimension for cinemagoers looking for a more intimate experience with a limited number of seats and customized services.

Before entering one of the rooms, which can accommodate some 30 people, visitors can enjoy imported beers or cocktails at a mini bar installed at their front.

CGV, on the other hand, has been offering its upscale Cine de Chef experience since 2007.

Through the service, the company offers the opportunity for customers to enjoy a fine dining experience before watching a movie.

Viewers are served by selected chefs at a restaurant located inside the theater before being supplied with finger food at a separate screening room.

There are currently two branches that offer this service - one in Haeundae, Busan, and the other one in Apgujeong, southern Seoul.

“We are planning on adding more high-end services to the theater,” said an official from the company.

“We are aiming to not only provide movies but also are attempting to undergo a makeover that will provide a relaxed time and space where visitors can enjoy their lives.”