Nakata takes on new career as a jewelry designer

Nakata takes on new career as a jewelry designer 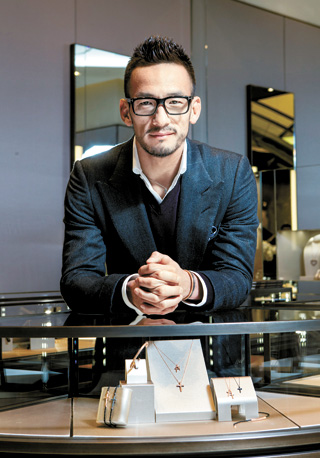 Hidetoshi Nakata, Japan’s greatest footballer, shows his jewelry collection on Monday at the Damiani Boutique in Seoul. By Kim Seong-ryong

In the prolonged rivalry between Korea and Japan’s national football teams, Hidetoshi Nakata used to be Japan’s best player, and even impressed Korean fans with his creative passes.

He was also included on the FIFA 100, a 2004 list of what Brazilian legend Pele considered to be the greatest living footballers.

The legendary midfielder abruptly retired at the age of 29, a prime age in many football players’ careers, and chose to travel around the world.

Now 38, Nakata has worked as a fashion model and businessman, but visited Korea on Monday with the new title of jewelry designer to launch the Metropolitan Dream by H. Nakata collection in collaboration with Italian jewelry brand Damiani.

“It’s been 10 years since I was interviewed by the Korean press,” he said as he sat down with the JoongAng Ilbo on Monday at the Damiani Boutique in Jamsil, southeastern Seoul. “I’m happy that I’m always challenging [myself to try] new things, and I wish Korean and Japanese football teams do the same.”

Q. You’ve had an interesting life since retiring.

A. I traveled all around the world as soon as I retired in 2009. I visited 49 cities in 27 countries, and later figured out that I traveled over 150,000 kilometers [93,000 miles]. What I learned on the trip is that football often works as a bridge among people and even countries. So I decided to use it for charitable activities. During my football career, I often talked to Koreans playing in the Japanese league, including former Manager Hong Myung-bo, and they inspired me to establish charitable organizations or football foundations after retirement.

Jewelry design seems a bit different from those dreams.

I’ve been fond of Damiani after learning that they donate some of their profit to provide drinking water to African refugees. Vice President Giorgio Grassi Damiani of Damiani Group, who is also an old friend of mine, suggested that I help launch a charitable collection and I accepted the offer.

I had a lot of responsibility in the project and also worked very hard on the designs because part of the profit from the sales goes to two global charity organizations. I tried to reflect my ideas in the products as much as possible.

Charity games are the only link to my football career because I refused to become either a football coach, administrator or commentator. I play three to four games a year. When I was playing football, my creed was “making people laugh is the second best thing after football,” because everyone around me must be happy for me to be truly happy.

You were the team’s ace when the rivalry between Korea and Japan was fiercer than ever.

The atmosphere of matches between the two countries was always heated. My debut on Japan’s A-team in 1997 was against South Korea. The games were always intense, but at the same time, all of [the Japanese players] enjoyed the game regardless of the result.

What do you think of the concern that Korea and Japan are losing their positions in international football?

During my time, Korea and Japan’s goal was to advance to the Round of 16 in the World Cup, and they are still staying at the edge of that goal. I think the teams lack the pride that they should get from representing their respective countries, probably because many of the national team members are playing with foreign clubs.

Japan failed to win the Asian Cup twice in a row, and the Korean team is having a hard time since Park Ji-sung retired.

The flow of football is like the tides. It sometimes surges but stays calm at other times. I would tell them not to be afraid of not having a leader. It is shame that the team lost a fantastic leader in Park, but it is not effective any more to lead a team with one or two leaders. We can break through our limitations if we are not afraid of change. I hope they are inspired by me, challenging new fields all the time.