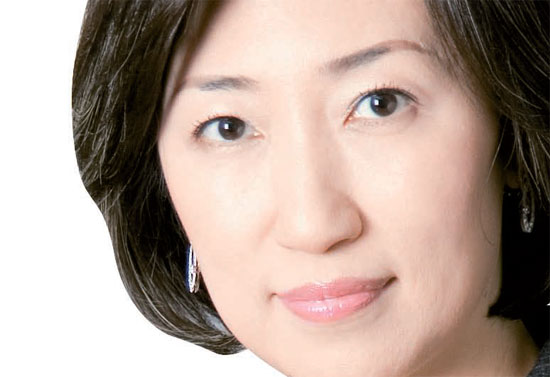 Eusu Holdings Chairwoman Choi Eun-young is starting a new chapter in her life by launching a dining business to rebuild her empire.

For much of her life, Choi was known as the wife of late Hanjin Shipping Chairman Cho Soo-ho who took over the company after her husband’s death in 2006.

Now, she is starting the third chapter of her life as chairwoman of Eusu Holdings, formerly Hanjin Shipping Holdings, after handing over Hanjin Shipping’s ownership to her brother-in-law and Hanjin Group Chairman Cho Yang-ho last year.

The theme of Choi’s new chapter will be dining.

Eusu Holdings is currently waiting until October for construction to be completed on a six-story building next to its headquarters in Yeouido, western Seoul, which it plans to make into a dining area with multiple restaurants.

Industry insiders say that Choi is making it clear that she wants her work to be separate from Hanjin Shipping. 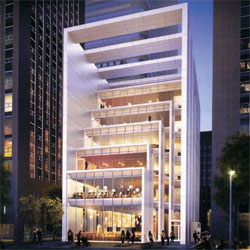 A rendering of the special dining building in Yeouido, Seoul.

Choi put her plan to enter the restaurant industry in motion last year when Eusu Holdings added the restaurants business to its portfolio at a shareholders meeting.

After that, the company decided to build on the 5,541-square-meter (1.4-acre) property, which was previously used as a parking lot.

“Before going ahead with construction, we received a consultation from real estate experts on developing a mall and we decided that there is enough demand,” an official from Eusu Holdings said. “The task force team is still reviewing the strategy of the dining business.”

The 50 restaurants and cafes operating at Avenue France put Seongnam back on the map and it is considered a prime example of how the organization of shops can revive commercialism. 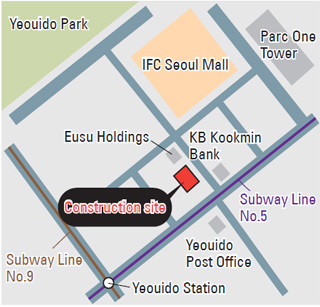 For Eusu Holdings, finding famous restaurants chains to enter its dining mall is important, but it is also considering opening its own restaurant chain.

“For one or two floors, we plan to reserve that space for our own restaurant brand,” an official from Eusu Holdings said.

Choi’s new business venture also highlights whether “widow CEOs,” such as herself and Hyundai Group Chairwoman Hyun Jeong-eun, can successfully develop businesses that were previously managed by their husbands.

Choi managed Hanjin Shipping for eight years after her husband, the third son of Hanjin Group founder Cho Choong-hoon, died in 2006 due to an illness. During her time, the company posted good performances as logistics boomed.

In 2010, Choi attempted to separate Hanjin Shipping from Hanjin Group, which led to an uncomfortable relationship with her brother-in-law Cho Yang-ho. The stand-off between the two intensified after Cho’s Korean Air Lines increased its shares in Hanjin Shipping Holdings.

But the timing of the separation wasn’t good for Choi and Hanjin Shipping. After the financial crisis in 2008, its shipping business suffered. After Hanjin Shipping posted net losses of 823.9 billion won ($756 million) in 2011 and 638 billion won in 2012, Choi had to wave the white flag.

Choi also suffered losses from handing over the Hanjin brand management business, through which the company collects fees and royalties, to Hanjin Shipping.

Because of these factors, Choi had to search for a new business field and has decided to go with dining.

“Because IFC Mall restaurants don’t operate late at night, we will probably look to fill that niche market,” said an official from Eusu Holdings. 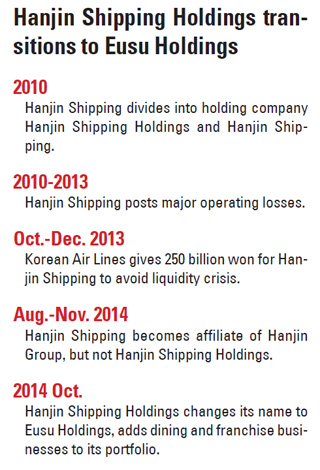