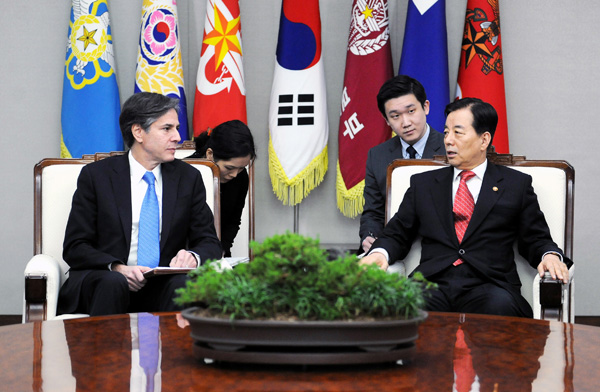 The second-most senior American diplomat said Tuesday as he wrapped up a visit to Seoul that progress in inter-Korean relations can demonstrate that Pyongyang is ready to engage with Washington.

U.S. Deputy Secretary of State Antony Blinken said to a group of Korean college students during a forum in central Seoul that he “strongly supports” Park Geun-hye’s efforts to develop better relations between the two Koreas, calling it “very important.

“If there is progress there,” he continued, “it would demonstrate that North Korea is actually prepared to engage with us. It might create a better environment, also, where we can pursue denuclearization.”

“The two sides agreed that inter-Korean dialogue can be helpful to North Korea’s denuclearization ... and that the U.S. and South Korean alliance, currently in its best condition, can be the foundation of the United States’ rebalance toward Asia,” said Kim Min-seok, spokesman for the Ministry of National Defense.

Blinken on Tuesday concluded his three-day trip to Seoul, where he met with government officials, military leaders, the business community and students.

This is Blinken’s first trip overseas since he took the post in December. He is scheduled to head to Japan and China next.

Seoul and Washington have “total harmony in policy approach between Washington and Seoul on this,” Blinken said, as he spoke at the Embassy Youth Forum: Real People Talking, which was hosted by the U.S. Embassy in central Seoul.

However, as long as North Korea continues to develop its nuclear and missile weapons program, he said, it will be difficult for the regime to become a member of the international community, adding that the choice was ultimately Pyongyang’s to make.

“It can remain poor and isolated, cut off from the world, or it can have an opportunity to rejoin the international community,” Blinken said.

“But it can’t do that if it insists not only on keeping nuclear weapons but trying to build more and more of them - [as well as] missiles that you can put weapons on that can hit South Korea very easily, and eventually the United States.”

He added that Washington was working toward concluding the Trans-Pacific Partnership trade agreement this year, of which “hopefully South Korea will be a part.”

His visit was highly publicized, especially among the younger generation via “Twiplomacy” - or diplomacy over Twitter - which is popular with U.S. President Barack Obama’s crowd.

Since Sunday, Blinken has featured in Twitter and Facebook posts eating at a traditional Korean ginseng chicken soup restaurant with longtime friend Mark Lippert, the U.S. ambassador to Seoul, posing in front of the King Sejong statue in Gwanghwamun, and walking central Seoul’s scenic streets.

The talk was streamed live on the U.S. Embassy Seoul’s YouTube channel.

In it, he called Korea cuisine “very, very good food.

“Now I have to go home and see if I can find the same thing in Washington,” he added.