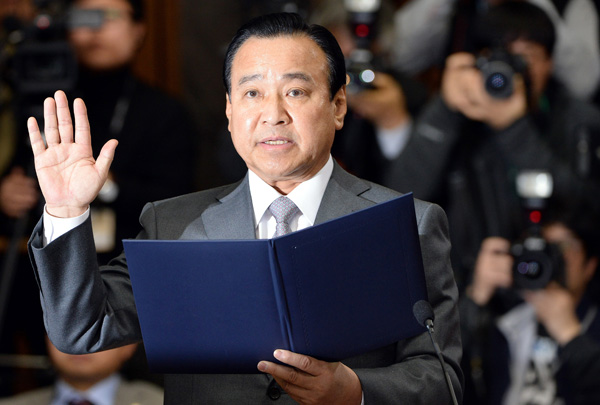 Lee Wan-koo, the nominee for prime minister, takes an oath to tell nothing but the truth at his confirmation hearing in the National Assembly on Tuesday. [NEWSIS]

Allegations against the former Saenuri floor leader have continued to snowball in recent weeks, tearing down the initial notion that he would easily pass his confirmation hearing, which commenced Tuesday.

Seemingly determined to force Lee out, the main opposition made public the manuscript of a tape recording in which the nominee bragged about his ability to influence press coverage using his personnel network.

The disclosure drew strong protests from the ruling Saenuri Party and forced the hearing to be suspended for more than two hours.

Fully aware of the rapidly changing public sentiment against him, Lee offered his apologies at the beginning of the two-day hearing. The allegations against him range from his supposed willingness to obstruct freedom of the press to draft-dodging and real-estate speculation.

“I apologized 100 times about the media issue. I can’t refrain myself from apologizing again before lawmakers here, the press and the people,” Lee said. “I apologize.”

His humble gesture was a dramatic turnaround from the confidence he displayed when he was first named to replace current Prime Minister Chung Hong-won, who has maintained his position after President Park’s earlier choice stepped down amid concerns over ethical lapses.

Lee’s apology, however, did not stop NPAD lawmakers from disclosing the manuscript of a recording of his conversation on Jan. 27 with reporters during a luncheon.

In the manuscript, which was disclosed at the hearing without audio, Lee was quoted as saying that he could simply call an editor with whom he had close relationship and tell him or her to drop any story that would put him at a disadvantage.

“[The editor], then, would have no choice but to drop it,” Lee says in the recording.

The disclosure drew strong protests from Saenuri lawmakers, who claimed that the tape violated ethical press codes because Lee had been unaware he was being recorded.

The confrontation led NPAD lawmakers to rush to the Assembly’s press room to make public the rest of the manuscript.

It was also revealed that Lee bragged about his ability to provide subsequent career opportunities for retired journalists as heads of university departments using his personal connections.

He added that the anticorruption bill that subjects journalists to punishment under a strict code of conduct was also not passed through the Assembly because he had opposed it.

The series of new revelations further cornered the former South Chungcheong governor, who initially denied making such remarks but relented later in the day, claiming he did not “remember” precisely what he said because he “had not slept for days.”

“To be honest, I do not recall what I said [in that talk with reporters],” Lee said, adding that he had been confused due to a lack of sleep.

Lee was also hammered by opposition lawmakers over allegations of real estate speculation. Pointing at a number of investments he inked that turned out to generate huge profit margins, NPAD Rep. Hong Jong-hak went on to ridicule Lee, calling him “a real estate investment genius.”

Displaying a list of apartment purchases Lee made in the affluent Gangnam District in southern Seoul, Hong said the apartments Lee bought and subsequently sold were “located in areas whose real estate values soared on the largest scale in Gangnam.”

If Lee foregoes his nomination amid the controversy, he would be the third consecutive prime minister nominee to fall victim to allegations over personal ethical breaches.