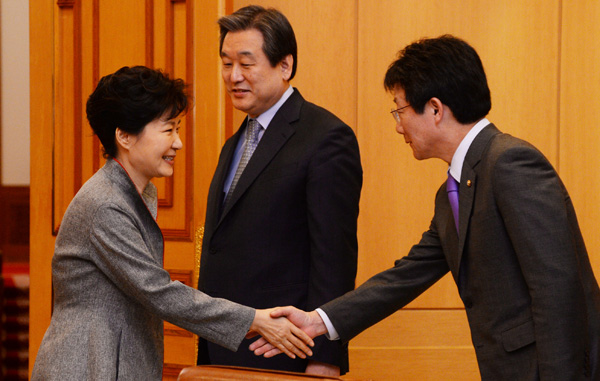 President Park Geun-hye asked for the ruling Saenuri Party’s cooperation in government efforts to revitalize the economy during a meeting Tuesday with the party’s senior members.

The discussion comes after Saenuri lawmakers and Park showed signs of discord on the administration’s ardent philosophy that welfare programs would be maintained without additional tax increases.

In her meeting with Saenuri Chairman Kim Moo-sung, Floor Leader Yoo Seong-min and Chief Policymaker Won Yoo-chul, Park expressed hope that the Saenuri’s new leadership would take the lead in passing bills designed to boost the economy during the parliament’s extraordinary session this month.

In response, Rep. Yoo, an expert on the economy who was elected last week, stated that the ruling party would aim to pass a package of bills intended to bolster the economy, as well as an ambitious reform bill that would overhaul the debt-ridden pension system for government employees.

However, “under the National Advancement Act, no bill can be passed without consent from the opposition,” the newly elected floor leader added, vowing that he would attempt to persuade high-ranking members of the main opposition New Politics Alliance for Democracy (NPAD) to work to approve crucial bills in this month and in April.

Saenuri Chairman Kim sided with Park on the importance of prioritizing the passage of economy-related bills.

“I wholeheartedly agree with your remark that revitalizing the economy should be of utmost importance,” he said.

The president’s meeting with senior ruling party members was held after Kim and Yoo made remarks that deviated from Park’s longstanding promise to sustain the current welfare system without raising taxes.

In his address before the National Assembly on Feb. 3, the ruling party chairman said that offering wider welfare benefits without a tax hike was impossible and that politicians could not “deceive the public.”

Later, he slightly modified the tone of his commentary. “The government and the Saenuri Party have no difference in opinion that a tax hike is the last resort,” he said Friday during a party meeting.

The Saenuri’s floor leader also followed suit, saying lawmakers should not rule out raising the corporate tax rate to its previous 25 percent, from the current 22 percent, which sparked speculation that there may be rising tensions between the ruling party and the Blue House.

The corporate tax rate on taxable income exceeding 20 billion won ($18.26 million) was slashed by the former Lee Myung-bak government, and newly elected NPAD Chairman Moon Jae-in has vowed to return it to its previous level.

Since her presidential campaign, Park has maintained her position that the government can still draw more tax revenue without resorting to tax hikes by cracking down on the underground economy and fostering a business-friendly environment by getting rid of unnecessary regulations to prompt national corporations to invest more.

Park and the Saenuri lawmakers also agreed to form a consultative body involving officials from the Blue House, the government and the Saenuri that would meet twice a month to coordinate each group’s policy directives.

Saenuri Representative Yoo, the ruling party’s chief policymaker as well as its first vice floor leader, will take part in the new committee, while the government plans to send finance and social affairs ministers and its state affairs coordination director. Senior presidential secretaries for policy, state affairs and the economy will also participate.

The agreement to create a trilateral body came after Saenuri Chairman Kim openly complained about the lack of communication between the presidential office and the ruling party, noting last week in his address before lawmakers that the high-level talks involving the government, the Blue House and the ruling party had only been held twice since Park took office.