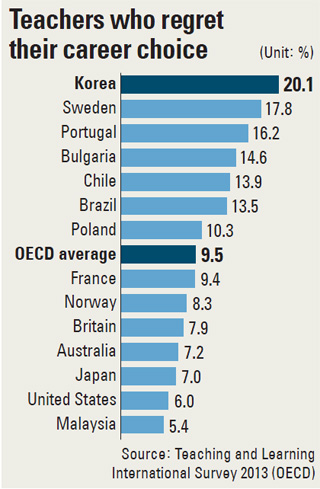 A middle school teacher in southern Seoul was baffled one day when one of her students claimed that the way in which she explained a math problem was different from the way the student had learned it at a private academy.

“Even though they taught you in another way, this is the standard way to solve this problem,” the teacher, surnamed Kim, told her pupil.

That answer, however, provoked complaints from the student’s mother, who called the school and accused Kim of embarrassing the child.

That was just one of many moments, Kim admitted, when she felt ashamed to be a teacher in Korea.

Here, where education is highly valued, teaching has long been a respected profession. Teaching is considered to be a stable occupation, and usually comes with a good pension.

But teaching’s popularity has dwindled in recent years, with an increasing number of educators admitting that they regret their career choice.

Korea ranked highest in terms of the percentage of teachers who claim they regret entering the profession among the 34 member-countries in the Organization for Economic Cooperation and Development (OECD). Those results are based on an analysis by Yang Jeong-ho, a professor at Sungkyunkwan University, of the Teaching and Learning International Survey 2013.

In the report, Yang analyzed 105,000 middle school teachers in OECD countries from the survey. The percentage of those in Korea who said they regretted becoming a teacher reached 20.1 percent, Yang found, while the average rate for OECD countries was 9.5 percent.

In answering whether they would become a teacher if they had to choose again, 36.6 percent of Korean respondents answered “No.” That rate is also higher than the OECD average, at 22.4 percent.

Wages for teachers in Korea are higher than the average in OECD countries, however. Here, as a person moves up in their career, the more they are paid based on their teaching experience, leading Korean teachers rank high among OCED countries in terms of wages.

“It’s that feeling of frustration that makes teachers in Korea unsatisfied with teaching students,” said Lee Seong-ho, an education professor at Chungang University. “Those teachers lose the motivation to lead students as their authority and discretion is minimized.”

Another major problem comes from the incapacitation of public education, which led a decrease in respect for teachers as a result of the zeal for private education, said Kim Mun-jo, a social science professor at Korea University

“When a fight occurs between students, some parents bring the case to court,” said a principal of elementary school who asked for anonymity. “There was a time when I had to kneel down in front of the parents of one student.”

Some teachers also point out that the stiff culture in the education industry adds to the problem.

“Some teachers put too much effort into dealing with administrative work from the upper echelon, like the Ministry of Education,” said Hwang Geum-jung, an education professor at Yonsei University.

Prof. Yang advised agencies like the Ministry of Education and provincial education offices to come up with measures to boost teachers’ morale.

“A system that provides incentives to teachers according to their performance is also needed,” Yang said.

“Also, renewing a teacher’s certificate regularly is a good way to raise teaching quality in the sense that those who remain in school and continue to be dissatisfied with their jobs until retirement can have a bad influence on students.”