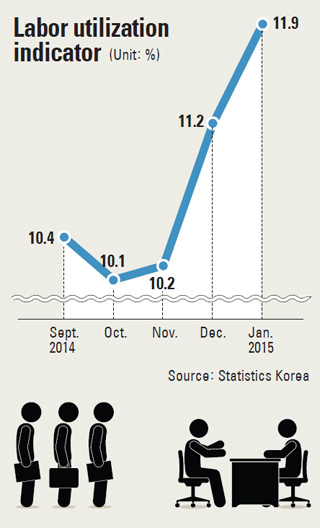 It is understandable that January is typically a slow season for new employment, but the country’s real jobless rate continues to rise, indicating harsh conditions for job seekers.

According to a monthly report by Statistics Korea on Wednesday, the labor underutilization indicator - adopted in October to include those who are not actively seeking work because they are preparing for examinations to enter professions, or get positions with the government or conglomerates - rose 0.7 percentage point to 11.9 percent in January, continuing its increase of the previous three months.

The indicator is based on guidelines devised by the International Labor Organization and also includes those who currently hold part-time jobs, but want full-time work.

Since the introduction of the indicator, it has been used as another way to measure how ordinary people feel about labor market conditions.

The report said the official jobless rate stood at 3.8 percent last month, up from 3.4 percent in December.

The latest report showed the unemployment rate for young people, between the ages of 15 and 29, was 9.2 percent last month, up from 9 percent in December.

It is the highest monthly figure since 2000, indicating that young people are having a more difficult time finding jobs today than they have in 15 years.

“The numbers may look as if employment conditions have deteriorated, but considering seasonal factors such as the Lunar New Year holidays [that fall later in February this year] and cold weather, the job market as a whole is continuing to improve,” said Sim Won-bo, head of the employment statistics division at the agency.

Meanwhile, the number of employed people reached 25.1 million last month. About 347,000 jobs were created during the month, the report showed.

The number of new jobs was the lowest since May 2013, and the first time job creation fell below 400,000 in seven months.

The Ministry of Strategy and Finance said that while the number of new jobs fell from December, the overall employment rate rose for the third consecutive months.

The employment rate for people between the ages of 15 and 64, based on the standard of the Organization for Economic Cooperation and Development, inched up 0.5 percentage point to 64.8 percent year-on-year, the ministry said.