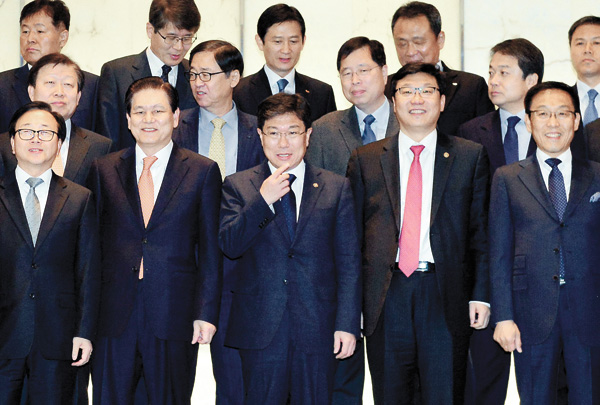 Korea’s 17 conglomerates have agreed to invest 34.4 trillion won ($31.3 billion) this year, while the government promised it will support them by easing regulations on chaebol entering new business areas, and on mergers and acquisitions.

Top executives of the conglomerates gathered Wednesday morning at the Plaza Hotel, central Seoul, to announce their plans. Minister of Trade, Industry and Energy Yoon Sang-jick and Vice Minister of Strategy and Finance Joo Hyung-hwan, attended the roundtable meeting.

“We are all aware that this is still a difficult time, but please keep investing to prepare for our future,” said Yoon. “I hope this year’s focus to be on corporate restructuring, which will expand the size and expertise of your stronghold business, while allowing you to enter new businesses.”

Samsung Electronics is scheduled to start building a new semiconductor production line by June in Pyeongtaek, Gyeonggi. The estimated cost of the line is 15.6 trillion won.

Samsung Display and LG Display are scheduled to expand their OLED display lines instead of moving production overseas. Each project is worth at least 4 trillion won.

The remaining 12 trillion won will go to the government-led projects introduced on Wednesday. Scheduled to get underway as early as the first half of the year, the projects largely involve the expansion of oil refineries and renovation of factories to make them more environmentally friendly.

Hyundai Motor will expand its engine production, and Hyundai Mobis plans additional facilities at its factory in Chungju, North Chungcheong.

“Recent business mergers and acquisitions - between Posco Specialty Steel and SeAH Besteel, as well as the defense and chemical affiliate deal between Samsung and Hanwha - were exemplary cases of strengthening specialty areas, while transferring non-specialty areas to other partners,” said Yoon. “This helps Korean conglomerates better survive tough economic times and enhance their business foundation.”

The ministry will push to pass the so-called one-shot business reinvigoration law in the National Assembly by end of the year, which would significantly reduce screening processes by the fair trade watchdog and provide an acquisition tax waiver.

The ministry also will cooperate with Korea Development Bank to extend loan interest benefits to newly-restructured companies that need capital for investment.