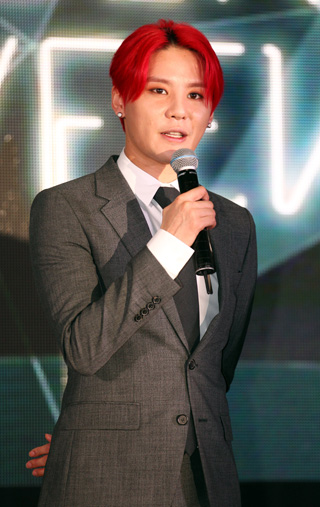 “After releasing the third solo album, Kim will begin his Asia concert tour. The first destination will be Osaka, Japan,” said CJeS Entertainment, the singer’s agency, on Wednesday.

The agency also teased a couple of images that will be included in the album’s CD. The teaser images include bare feet covered in white, sheer cloth, a spider crawling up a man’s chest and Kim’s face hidden in the shadows.

“You can expect a different side of me through this album,” the singer said in the press release. “It will be starkly different from my first and second albums.

“I want to appeal to my fans with an album that can truly show my music style, which differs from JYJ’s music,” he added.

Kim will perform solo at the sold-out show “2015 Xia Third Asia Tour Concert in Seoul” at Olympic Park, southeastern Seoul, on March 7 and 8. The tickets for the concert sold out in 20 minutes.

With his second mini-album in 2013, Kim tried as many genres as possible, from R&B to dance to neo soul to funk.