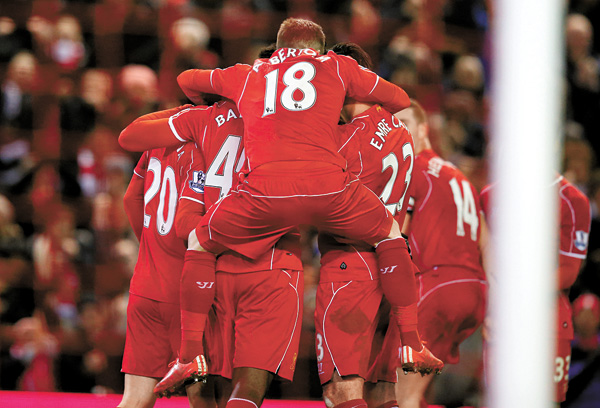 Mario Balotelli went from forgotten man to match-winner at Liverpool as his late goal against Tottenham tightened up the race for Champions League qualification in the Premier League on Tuesday.

The maverick Italy striker came off the bench for just his second appearance in a month, and pounced for an 83rd-minute strike to secure Liverpool a 3-2 win after the team had twice surrendered the lead at Anfield.

Arsenal, another team battling for a Champions League berth, scraped a 2-1 win over last-place Leicester to bounce back from its north London derby loss to Spurs and provisionally move level on points with third-place Southampton.

There are just three points between Southampton, whose game in hand is on Wednesday, and seventh-place Liverpool. Tottenham is sixth, a point ahead of Liverpool.

In Tuesday’s other two games, Hull and Queens Park Rangers beat rivals for relegation to climb out of the bottom three.

QPR’s 2-0 win at Sunderland ended its run of 11 straight losses in Premier League away games, while Hull won by the same score over Aston Villa, which dropped into the relegation zone and has now lost five straight games.

Liverpool fans arrived at Anfield to celebrate the first start after a long injury lay-off for Daniel Sturridge. They left singing the name of another striker.

That changed when he poked in a cross from fellow substitute Adam Lallana, although he barely raised a smile as he was mobbed by teammates.

Spurs had come from behind twice in an entertaining game, with Lazar Markovic’s opener in the 15th cancelled out by a superb turn and finish by in-form striker Harry Kane for his 23rd goal in all competitions this season.

Captain Steven Gerrard, who later went off with a hamstring injury, regained Liverpool’s lead from the penalty spot in the 55th before Kane set up Mousa Dembele in the 61st for a second equalizer.

Liverpool is unbeaten in nine league games and midfielder Jordan Henderson said: “We’ve got a little momentum, we’ve been playing some great stuff and I thought we showed great character tonight.’’

Arsenal is back above Tottenham, three days after losing to its neighbor at White Hart Lane, after withstanding a spirited second-half response by Leicester.

Laurent Koscielny and Theo Walcott scored to give Arsenal a 2-0 lead by halftime but Leicester provided a greater threat after the break and Croatia striker Andrej Kramaric scored his first goal for the club in the 61st.

The win came at a cost for Arsenal as star forward Alexis Sanchez and midfielder Aaron Ramsey went off injured in the second half.

Leicester is five points adrift of safety, putting more pressure on manager Nigel Pearson in the week his future was placed in jeopardy following reports he had been fired then reinstated by the club’s Thai owners on Sunday.

“When you see the way they are playing football, you are surprised they are bottom of the league and that they want to get rid of their manager,’’ Arsenal Manager Arsene Wenger said.