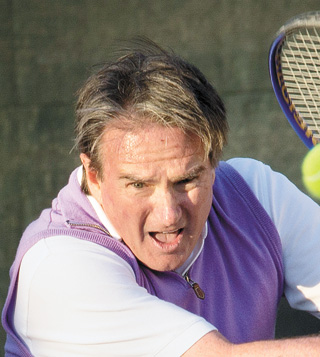 Relishing a reunion and heading for retirement from public matches, Jimmy Connors was in the first game of Tuesday’s exhibition when he found himself in a long, arduous rally with Aaron Krickstein.

“Didn’t we do this once before?’’ Connors shouted at Krickstein as the point continued.

The private exhibition did indeed stir memories of their famous 1991 match at the U.S. Open. Three hip replacements later, Connors agreed to a rematch, accepting an invitation to play a set before a small crowd at St. Andrews Country Club, where Krickstein is director of tennis.

Before the match, Connors said it would be his last in public because his hips make it difficult for him to play competitively. He hadn’t competed in front of a crowd in two years. And while he took the court looking fit, he also looked ready for retirement. 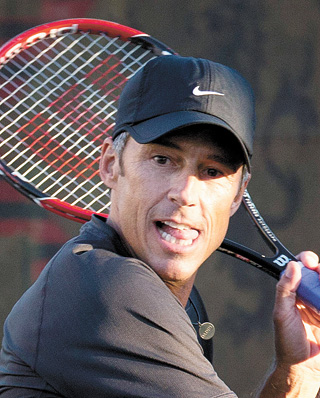 Before the warm-up ended, Connors was wincing at a pain in his left arm. After the second point, he was panting. After three games, he was clutching his chest and checking his neck for a pulse, playing to the crowd as always.

But Connors, 62, seemed sincere when he said he enjoyed the reunion. When Krickstein telephoned him eight months ago with the invitation, it was the first time they had spoken in many years.

“There was no rhyme nor reason - our paths just never crossed,’’ said Krickstein. “It wasn’t like I was holding a grudge against Jimmy Connors because I lost that match in 1991.’’

The match ranks with the most memorable in tennis history. On a Labor Day that happened to be Connors’ 39th birthday, the eight-time Grand Slam champion rallied from a 5-2 deficit in the fifth set to win, continuing his storybook run to the semifinals.

“The best 11 days of my tennis career,’’ said Connors.

In the years since, the match has been shown frequently on network TV as filler during rain delays at the Open. Connors said he has never watched the replays, and he’s puzzled by their staying power.

“I don’t get it. What has captured the imagination, with everything going on around tennis now with all the great players supposedly,’’ he said, showing his disdain for today’s game. “Now don’t go saying, ‘He’s bitter.’ I’m just stating a fact - why that match?’’

Connors briefly coached Andy Roddick, but has had little to do with the sport since he left the tour. He prefers the play of his era, when the rivalries were heated and the matches less genteel.

“We gave you everything - fun, controversy, excitement, drama, characters,’’ he said. “And you didn’t like us for it. All we did was get criticized for it.’’

Connors willingly played the bad-boy role for much of his career, but the exhibition was a love fest, and he was on his best country club behavior.

He wore a sleeveless sweater, just like in his touring days. But the short shorts were missing, replaced by long pants. And he left back home his steel T2000 racket, which was outdated even when he won titles with it.

There was no sign of his old mobility, either.

“For me the fun part of tennis was the running, and that’s the one thing I cannot do,’’ he said. “It is frustrating.’’

He left the baseline only with great reluctance, and hobbled when he had to move much. But his groundstrokes were as flat and crafty as ever, and he whizzed several passing shots by Krickstein, to the delight of spectators.

“I’m as surprised as you,’’ Connors told them after one point.

“He waited until Jimmy was 62 with three new hips, then invites him to his home club on Jimmy’s least favorite surface,’’ Arias told the crowd.

Krickstein laughed, and a short time later grinned again when he closed out the victory, his first ever over Connors. The two shared an embrace at the net, then chatted with fans and talked about the old days.

“I was a good villain,’’ Connors said.

He spoke in the past tense.