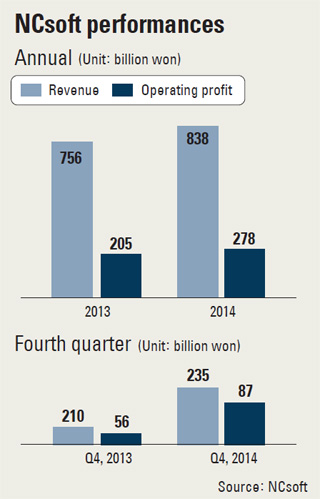 NCsoft has rejected part of the request made by its largest stakeholder, Nexon, which may lead to further disputes between the two leading game developers.

Yoon said there is no reason to dispose of the stock.

“The treasury stock is one of the key assets that could be used as funding for aggressive and important investments or M&As in the future,” he said. “There is no reason for us to immediately dispose of the treasury stock.”

Additionally, Yoon said it is difficult to see how the corporate value of NCsoft would be elevated by the management involvement of Nexon.

“Cooperation with Nexon in the past has not resulted in successful performances,” said Yoon.

Nexon earlier asked NCsoft to hire one of its executives when the company holds its shareholders meeting on March 27.

Yoon said, however, NCsoft is still willing to cooperate with Nexon for their mutual benefit.

“If there is any way both companies can benefit through a partnership, we can accept it at any time,” he said.

Additionally, it accepted Nexon’s request to increase dividend payments. NCsoft promised to pay 3,430 won ($3.10) per share, the largest amount it has ever provided.

Its yearly revenue also increased 11 percent to 838 billion won in 2014 from 756 billion won a year earlier.

Quarterly profit for the fourth quarter of 2014 posted 87.4 billion won, a 54 percent increase from the same period in 2013. Quarterly revenue jumped 12 percent year-on-year in the last quarter to 23.5 billion won.

In North America and Europe, Guild War 2 continued to reap solid profits, and in China, NCsoft saw an increase in revenue from royalties in the fourth quarter to 136.8 billion won.

“The increase in fourth-quarter revenue from Lineage came as we reinforced the game content since last year and expanded the user base,” said Yoon.

“Although it will be difficult to continue seeing such results in the first quarter, based on yearly performance, sales of Lineage will not shrink this year from last year.”

However, there was no annual earnings guidance, which drew much attention.

“We decided not to present a performance guideline as the game industry relies heavily on trends and popularity of different games at different periods, and it fluctuates a lot depending on when a new game is released,” Yoon said.

The decision comes as NCsoft and its affiliate Ntreev Soft prepare to launch mobile games this year and the online game MasterXMaster.

“We plan to launch the online game MXM during the second half of this year, and we will constantly launch mobile games with our affiliate throughout this year,” said Yoon.

“We also plan to conduct private testing and global testing of the online game Lineage Eternal this year.”

The company’s CFO added that 2014 was the year NCsoft enhanced stability in sales through diversified revenues from domestic and overseas sales, contributing to the company’s record high performance.

“Based on a healthy revenue structure, we will maximize shareholder value and continue to push for policies that actively return benefits to shareholders,” he said.

However, despite the announcement of a dividend increase, NCsoft shares lost 2.33 percent on the Kospi Wednesday.