Popularity of e-cigarettes is lighting up Korea

Popularity of e-cigarettes is lighting up Korea 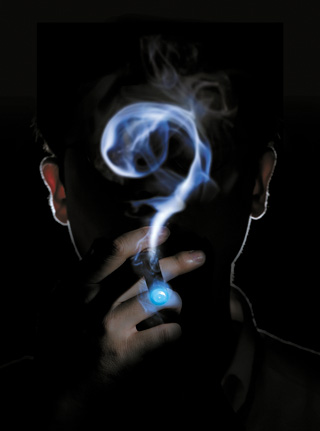 Are electronic cigarettes a healthier alternative to a pack-a-day habit, and can they help users quit smoking? Studies by health journals and the government have found differing answers, but that hasn’t stopped the rising popularity of e-cigarette devices in Korea.

Kim Joon-hong, a 30-year-old pilot who has been smoking for more than 10 years, recently replaced his tobacco cigarettes with an e-cigarette.

He said he did not want to quit smoking completely, but decided that an e-cigarette is much more cost effective and has other benefits over smoking than regular cigarettes.

“I usually smoke one pack of cigarettes a day, which used to cost me around 75,000 won a month. Now that the prices of cigarettes have almost doubled, it will cost me around 150,000 won per month,” said Kim. “However, with the e-cigarette, I only spend around 30,000 won for the nicotine liquid, which lasts a month.

“There are also other benefits,” he added. “I personally feel much healthier in the morning and my colleagues and family ask me if I quit smoking because it doesn’t smell no matter how much I smoke, even indoors or in my own car.”

An e-cigarette is made up of a battery and a cartomizer, which is a disposable cartridge that converts liquid into vapor. The liquid that is poured into the cartridge is made of vegetable glycerin mixed with spices, and some varieties include nicotine.

Demand for e-cigarettes has shot up since the government raised the tobacco tax by 2,000 won at the beginning of the year, translating to an increase of about 80 percent.

However, electronic cigarettes have ignited a firestorm of controversy over how safe they actually are, as well as whether they are an effective method of kicking the habit.

E-cigarettes are considered harmful because although the vegetable glycerin is edible, the risks of inhaling it over an extended period of time are not clear.

According to the World Health Organization, other safety concerns include carcinogens detected in e-cigarette vapor and the possibility of ingesting excessive amounts of nicotine. Some liquids contain a nicotine concentration of 2.83g/m3, about twice as much as a regular cigarette. 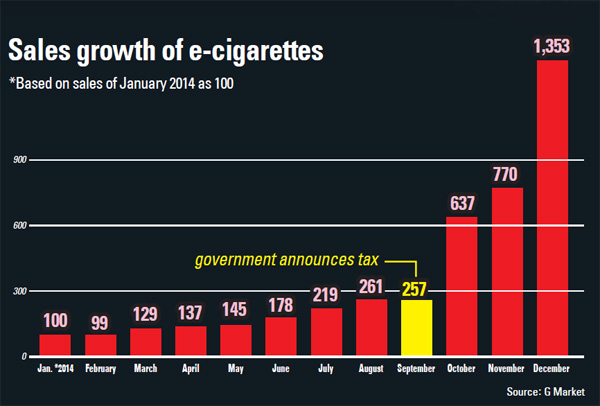 The WHO has warned that e-cigarettes are just another type of cigarette and should not be used as a method to help quit smoking.

Regardless, the devices have become hugely popular among local smokers for a variety of reasons, whether as part of a New Year’s resolution to quit smoking, save money or just as a healthier alternative to cigarettes.

CJ O Shopping aired a segment selling the Doctor Stick 1000 last month. It was the first time CJ O Shopping had advertised an e-cigarette since 2012.

“Thanks to the trend of people trying to quit smoking, followed by the cigarette price hike, we resumed sales of e-cigs for the first time in three years,” said a spokesman for CJ O Shopping. “Around 3,000 were sold in just an hour after the program aired.”

“Because of the enthusiastic response from our customers when we first aired a segment for e-cigarettes, we decided to sell them more regularly, around three times a month,” said a spokesman for Lotte Home Shopping.

A new e-cigarette called VEIL Maxi-S made by Korea’s Ruyantech Technology sold out in just three days after it went on sale.

According to online shopping mall Lotte.com, e-cigarette sales increased by 18 times between Dec. 29 and Jan. 4 year-on-year. Customers in their 30s made up the largest portion of buyers at 41.7 percent, according to the website.

Convenience stores have even started selling disposable e-cigarettes made by Ecin Korea. The products are now sold at Ministop and Homeplus 365 stores nationwide.

The e-cigarette market was booming overseas before the device became popular in Korea because tobacco prices are usually higher in foreign markets.

The global e-cigarette market, which was worth $20 million in 2008, has surged to $1.7 billion at the end of last year. The local market was estimated to be worth 50 billion won as of January. There are currently 2,000 types of e-cigarettes available, most of which are produced by small and medium manufacturers. 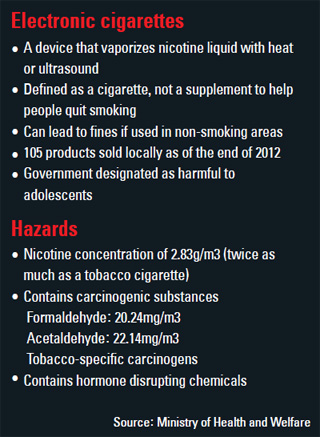 However, as the e-cigarette market is expected to grow further, experts predict that the debate over how e-cigarettes should be regulated will intensify.

The Korean government has made its stance well known, saying that it classifies e-cigarettes as another form of cigarette, rather than a healthy way to quit smoking.

The Ministry of Health and Welfare said on Friday that electronic cigarettes contain more carcinogenic substances than regular cigarettes. The ministry added that it will strengthen its monitoring of promotions and advertisements for e-cigarettes, and will educate the public on their risks.

An analysis on the vapor in the cigarettes released by the ministry in 2012 found carcinogenic substances such as formaldehyde, acetaldehyde, tobacco-specific carcinogens and addictive nicotine in the vapor.

Of the 105 varieties of smoking liquid sold in the domestic market, 30 had a nicotine concentration between 1.18 to 6.35 grams per cubic meter, twice as much as the amount found in smoke from a regular cigarette, the report said.

Considering that the lethal nicotine dose for an adult is 35 to 65 milligrams, inhaling 150 times that amount from an e-cigarette can amount to a lethal dose, according to the study.

The ministry also said Friday that it will start cracking down on TV home shopping channels that are selling e-cigarettes. It is legal for them to sell products that help users quit smoking, which is how they market e-cigarettes. However, they are banned from selling tobacco products.

Because the ministry considers electronic cigarettes the same as the tobacco variety, it will start tackling false advertisements by fining TV stations up to 10 million won for ads that claim e-cigs are not harmful or are an effective tool to quit smoking.

“Various similar carcinogenic substances contained in tobacco cigarettes were detected in e-cigarette vapor, so smokers must not consider them as a smoking-cessation device,” said Ryu Geun-hyeok, the ministry’s bureau chief of health policy.

But there are advocates who oppose the government’s position and claim that e-cigarettes serve as an excellent aid for smokers attempting to quit.

The academic journal Nicotine and Tobacco Studies published by the Korean Association of Smoking and Health on Jan. 19 cited a study conducted in the United States that said electronic cigarettes are less addictive than regular cigarettes.

The study was conducted by a research team led by Jonathan Foulds, professor of public health sciences and psychiatry at Penn State College of Medicine.

The team surveyed 3,500 people who had switched to e-cigarettes to see if they had become less dependent on smoking.

In addition, the study found that while 90 percent of tobacco users felt anxious and showed neurotic symptoms before smoking, only 25 percent of e-cigarette users experienced similar symptoms.

The report added that after switching to e-cigarettes, smokers had less nicotine in their blood than when they smoked tobacco. This is because when smoking regular cigarettes, people tend to ingest more nicotine at one time by inhaling several times continuously to finish a cigarette. But with e-cigarettes, the smoker usually inhales just a few times.

Last October, the International Journal of Environmental Research and Public Health, a highly acclaimed scientific journal, also concluded through its research that e-cigarettes can help reduce the desire to smoke.

But the Korean government is sticking to its findings and is even planning to fine people who smoke e-cigarettes in non-smoking areas.

But with the e-cigarette market growing rapidly, it is questionable whether the government will be able to enforce the regulations.

The government has been accused by the public of looking for ways to boost tax revenue by monitoring e-cigarettes under the pretense of its concern for public health. It has also been criticized for repeatedly citing old studies that were released in 2012.

When asked why the Health Ministry is referring to old studies in order to warn smokers, an official said the ministry did not expect the demand for e-cigarettes to jump so quickly, and admitted that it has not conducted recent studies on the devices.

“We will conduct new studies on the latest e-cigarette products and liquids within the first half of this year,” the ministry official said, adding that it will look into the substances used in electronic cigarettes made since 2012.