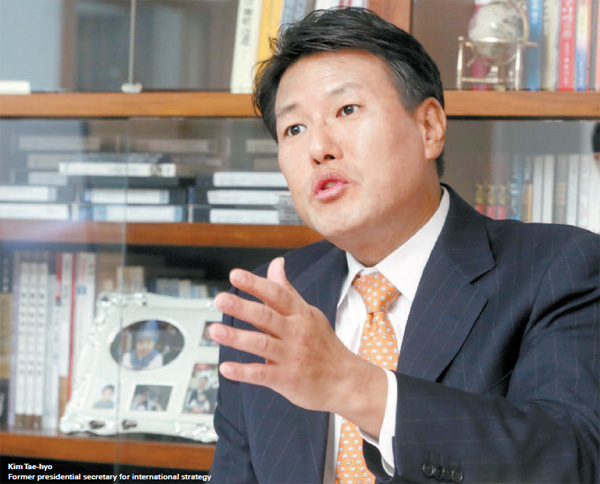 Kim Tae-hyo, the head of Sungkyunkwan University’s Graduate School of Strategic Studies, worked as a national security and diplomacy adviser to presidential candidate Lee Myung-bak, and later served in Lee’s Blue House as the presidential secretary for international strategy.

Under the previous administration, he was considered a key aide in national security.

Kim recently worked with Lee again to help him pen his memoir, “The President’s Time,” which reflect several of Kim’s ideas. The 800-page memoir, released on Feb. 2, contains 12 chapters, with seven of them discuss national security issues.

The JoongAng Sunday, an affiliate of the Korea JoongAng Daily, sat down with Kim on Jan. 30 to hear his opinions on those matters.

Without systematic preparation, he added, the public may be highly critical of a South-North summit.

Q. You must have heard so many things following the book’s release.

A. Some people said it was a worthy read, while others - particularly those who ruined the relationship with Pyongyang by carrying out the wrong polices - criticized the former administration’s efforts. Those people still believe Lee’s memoir has a political agenda.

Why did you decide to be a part of this book?

Lee had already planned to write a memoir during his term. His administration published a white paper during that time, but since it was an analytical report that scrutinized data to determine how the government succeeded in its policies, he decided to write a book instead to lay out his individual thoughts. A team of writers gathered for a year after his term ended, and he debated for a long time whether he should publish a separate book on national security issues, which he thought were the most important. But he decided to combine them with economic and political issues since it was his first book.

In an interview with Japan’s Asahi Shimbun, you said North Korea made proposals for an inter-Korean summit twice, but the book said there were five proposals.

I just didn’t want to disclose to a foreign reporter information that was exchanged between the two nation’s intelligence agencies. I knew everything about national security. I only addressed information that had already been released in the media. No matter whether there were five or more proposals, there were three big stages in inter-Korean relations. The first round was right before the Cheonan warship was sunk, and the second round was after Yeonpyeong Island was attacked. The final round was when South Korea met North Korea in Beijing. During that time, the North made more than a dozen proposals.


Do you think the Cheonan warship sinking and the Yeonpyeong Island attacks happened because we didn’t accept the North’s summit proposals?

Not really. In 2009, before the Cheonan tragedy, South Korea defeated North Korean forces near Daecheong Island in the Yellow Sea. During the Kim Dae-jung administration, we had three military battles on the west coast and won two of them. That’s why the North went under water.

It was military revenge, and Kim Jong-un needed to look strong because he was about to succeed his father. Some people say Kim Jong-un carried out those attacks because he was angry over Lee’s policies toward North Korea, but I think that is only about 30 percent true.

Do you think the former administration is accountable for that 30 percent?

We were on the right track. North Korea made these military provocations because they were desperate, meaning that their strategies against South Korea were incorrect.

How will Lee’s memoir impact the future relationship between the two Koreas?

I think North Korea will start thinking about South Korea strategy in a different way. The current administration comes from a right-wing party, but they still might make the wrong decision if they decide to hold a summit just to show that they are doing something for the nation. But if people read this book and see that there were things they didn’t know, it will give the nation a chance to debate whether holding a summit is negative or positive, especially if it isn’t planned systematically.

I think they just said exactly what they did in that secret meeting in Beijing. They begged us. They asked us whether it was fine to use soft words in an apology. And North Korea proposed the covert meeting, not us.

You led the government in signing the General Security of Military Information Agreement (GSMIA) with Japan, but left the Blue House after the pact broke down due to strong public opposition. Some have claimed that you are pro-Japanese. In Lee’s book, there is no mention of that.

We weren’t sure where to include that in the book. If I write a book in the future, I will write about it for sure. I don’t want to defend the Japanese, but we were diplomatically unreasonable with the Japanese government. Everything was complete; the only thing left for both sides to do was to host a signing ceremony.

Before Lee became president, he consistently said he would visit Dokdo, but that didn’t happen. Do you think he would have visited if certain historical and territorial issues had been resolved?

I don’t think so. If those issues had been resolved, he wouldn’t have needed to go there.

Doesn’t that run counter to Lee’s ideas stated in the memoir?

Korea has maintained “silent diplomacy” for a long time. Lee believes this attitude has made Japan more active in vocalizing its dominance.