Murder in Philippines part of a broader trend

Murder in Philippines part of a broader trend 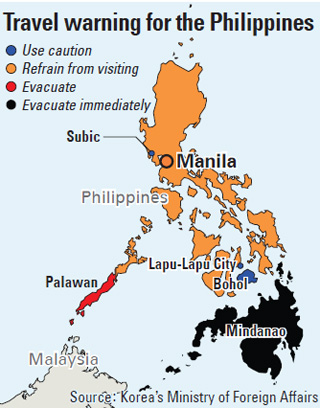 The murder of a Korean woman in Manila earlier this week has shed new light on the number of Koreans citizens killed in the Philippines, a popular business and tourism destination here.

Her killing was the fourth so far this year of a Korean national in the Southeast Asian nation.

Last year saw 10 Koreans killed in the Philippines, compared to 13 in 2013, when 88,000 Koreans were residing there. That compares to eight homicides in 2012 and seven in 2011, according to Rep. Shin Hak-yong of the main opposition New Politics Alliance for Democracy.

The situation becomes more serious when criminal cases are taken into account. Data from the Ministry of Foreign Affairs shows Koreans were victimized in 94 criminal cases in 2010 in the Philippines but the annual tally increased more than eight-fold to 780 in 2013. By comparison, 598 Chinese nationals were victimized in the same year, making Koreans the most commonly targeted foreigners.

Even more shocking is the data from the Foreign Ministry that shows the number of Koreans killed in the Philippines per 100,000 of the population, which stood at 11.42 in 2013, even greater than the Filipino average of 8.8.

On Monday, a 45-year-old Korean woman was shot dead by a gunman in a coffee shop in Quezon City, a technology and culture hub in Manila, according to the Foreign Ministry.

Local police said that the woman, surnamed Park, entered the shop without knowing that it had been seized by an armed intruder. When the gunman attempted to take her cell phone, she resisted and was subsequently shot.

In January, a Korean businessman was killed in Luzon, the country’s most populous island. And in a separate case in Luzon earlier that month, a man shot his younger brother during an argument.

The Foreign Ministry on Wednesday came up with follow-up measures regarding crimes against Koreans in the Philippines, which included dispatching an additional Korean police officer to the Korean Desk installed by the Philippine National Police.

The desk, equipped with a single Korean police officer, was initially established in 2010 to handle crimes involving Korean citizens.

The high number of criminal cases in the Philippines involving Korean can partially be attributed to the large number of Korean nationals who live or travel there.

Ninety thousand Koreans currently live there, and over 1 million Koreans visit the country, according to the Foreign Ministry.

However, more notable is that the majority of Koreans who are murdered there are businessmen.

Park Oe-byeong, professor of police administration at Dongseo University, said the Philippines has a contract-killing mafia with some 500 members, who can be hired to commit murder for as little as 1.2 million won ($1,093.)

“Guns are freely circulated in the Philippines, and authorities’ investigative capacity is far below par, which makes the country vulnerable to violent crime,” a Foreign Ministry official added.