105 cars pile up in thick fog on road from airport

105 cars pile up in thick fog on road from airport 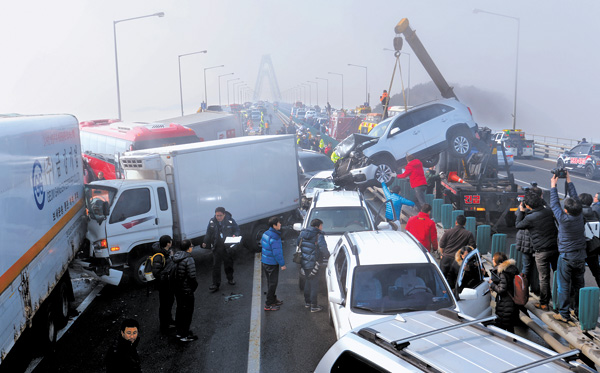 Authorities clean up Yeongjong Grand Bridge in Incheon following a 105-car pileup Wednesday morning. Two people died and 65 others were injured in the accident, which stretched over more than a kilometer (about 1,100 yards) on the bridge. Two of the injured are in critical condition. [NEWSIS]

Two people were killed and at least 63 were injured Wednesday in a 105-car pileup on Yeongjong Grand Bridge, a 4.4-kilometer (2.7-mile) stretch connecting Yeongjong Island and Incheon.

The accident is the country’s largest to date, involving the most vehicles.

The injured were transported to 16 hospitals, and authorities say the number of fatalities could increase. As of press time, two of the wounded were in critical condition.

Some of the injured included foreigners. The cars were moving eastbound, mostly coming from Incheon International Airport, located on the island.

A 58-year-old Thai national, who was here visiting a relative who works for the Seoul branch of the Tourism Authority of Thailand, was one of the two critically injured in the pileup and sustained wounds to the head.

Police suspect the initial collision occurred when one taxi rear-ended another, pushing it into the next lane. The pushed taxi then supposedly collided with an airport limousine bus, authorities said.

The driver who rear-ended the first taxi, a 60-year-old man surnamed Yoo, has reportedly claimed he was also rear-ended before colliding with the other taxi.

Authorities believe the massive pileup, which stretched more than one kilometer on the bridge, occurred due to thick fog.

Driver Lee Sang-hyeon, 30, who was injured in the accident, said he was not able to see because of the fog.

“I could barely see outside, and the car right ahead of me suddenly changed directions,” added another driver, Jo Eun-chul, who witnessed the accident. “I got out of the car and asked what was going on, and I heard continuous screeching and crashing sounds.

“It might have led to a bigger accident,” Jo added, “so I went into the limousine bus right ahead and told them to move to a safer place, and took two seriously injured people in my car to a nearby hospital.”

An official with the New Airport Highway, which is in charge of managing the bridge, said the organization had telemeters set up at each end of the bridge, though they only detect whether visibility is less than 100 meters.

“We also issue fog warnings according to data issued by the Korea Meteorological Administration,” the official said. “At the time of the accident, visibility was about 10 to 20 meters ahead. We informed drivers via the bridge displays to slow down due to the fog.”

Actual visibility on the bridge on Wednesday morning could not be verified because the bridge is not equipped with measuring devices. Fog’s effect on visibility tends to vary in the mountains, near lakes and shores. However, the country’s forecast authority said setting up measuring devices on every road and across geographical regions was difficult due to budget limitations.

“Fog sometimes forms in a small area and visibility can change rapidly, even in a small area,” said an official from the Korea Meteorological Administration. “We need a network for measuring equipment, but currently we don’t have enough.”

“Some of the cars are believed to have been speeding on the bridge,” a police officer said. “We are planning to punish those who are responsible for the accident after our investigation.”

The police announced that the traffic on the bridge was operating normally as of 3:12 p.m.