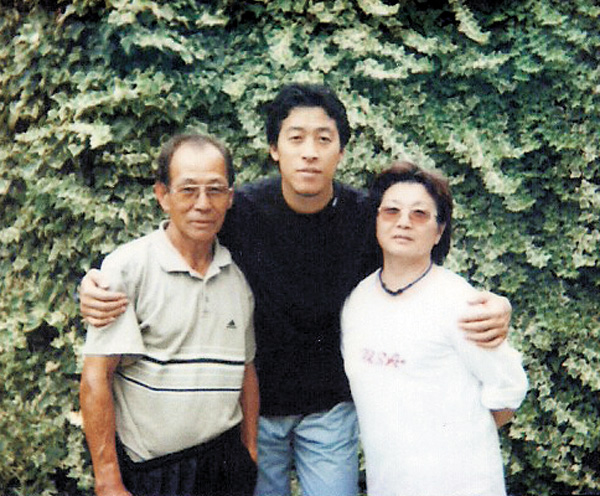 Lee Byeong-kyu, center, of the LG Twins, stands with Han Il-dong, left, and Han’s wife Lee Jeong-suk, right, in Germany in this 2003 photo. Provided by Han

In the popular film “Ode to My Father,” which has already attracted more than 12 million viewers since its December debut, protagonist Yoon Deok-soo travels to Germany, where he works as a coal miner to support his family following the war.

For 75-year-old Han Il-dong, who resides in Germany, there are several parallels with the fictional character. Like Deok-su, he came to Europe after the 1950-53 Korean War as a guest worker, working in the mines to support his family back home and eventually marrying a fellow nurse.

He now owns his own business in Germany and at one time headed an association for Korean residents there.

But unlike Deok-soo, Han has made his own contributions in his adoptive country, starting in the 1970s, when he would invite Korean athletes in Germany for rehabilitation to dinner. He has since taken care of a number of sports stars, even letting them stay in his home during their recovery period. Now, Han is sometimes informally referred to among those players as the father of sports rehabilitation in Germany.

“I’ve received phone calls from Korea since “Ode to My Father” became popular,” Han said. “But I just tried to help the athletes who were away from their home, so I feel grateful when people say I’ve made a small contribution to sports in the country.”

Q. You have sort of become known as the Deok-soo of sports.

A. When I first came to Germany, Korea was the second-poorest nation in the world. I was in the fifth group of miners sent to Germany, in 1965. Korea’s GDP per capita then was $70, even lower than Thailand’s at $120. I worked all day long 1,000 meters (3,280 feet) underground; I couldn’t even properly move my fingers the next day. We used to cry a lot. But we were able to let go of that hardship once we sent the money we earned back to our families in Korea. My monthly wage then was four times larger than that of the lowest-level civil servants then.

I heard Germans were often surprised by Koreans back then.

When the first group of miners came in 1963, the Germans prepared clothing to give as welcoming gifts because Korea was such a poor country. Then they were surprised when all 120 of the Koreans in the first group arrived wearing suits. They may have only been working as miners, but back in Korea, they all graduated from high school, and some of them were even university graduates or had master’s degrees. I think the Germans were also surprised to see that many of them enjoyed classical music during their breaks. I also heard that all 120 of them were found in their physical examinations to have roundworms.

Did you meet your wife in Germany, too?

She was a nurse who came to Germany a year later than me. The miners and nurses went on a 17-day trip together and we met on the bus. When I thought of marrying her, I realized her family was so poor. Then, people were well off with a million won, so I gave 400,000 won to her family without telling my family. In return, I got a sweet and devoted wife.

Did you help South Korean football manager and former player Cha Bum-kun come to Germany back then?

The Bundesliga was the best league in the world in the 1970s. There was a Japanese player, Yasuhiko Okudera, on my local team FC Koln. I thought, ‘If Korea plays football better than Japan, then why aren’t there any Koreans in the Bundesliga?’ So I asked Korea’s star player, Jo Yun-ok, who was staying in Germany to study, to recommend a player. Jo recommended Cha, and I began working on bringing him to Germany.

You are known as the father of sports rehabilitation.

After becoming close with Jo, footballers often visited me. I sometimes let them stay at my house, gave them rides and even translated for them. I was proud because I believed I was being a patriot.

When Ko Jeong-woon came to Germany for rehabilitation, I heard he was staying alone at a hotel. So I decided to let him stay at my place. It’s how it began. You could say most of the footballers who had surgery in Germany stayed at my place - and many basketball and baseball players as well. They also help out my son, Markus Han, who’s working as a sports agent now.

Who was your most memorable visitor?

Kim Ho, the former manager of the national team. He was the first Korean who studied football in Germany at his own expense. He focused so much on football then. In terms of players, I remember Cha Bum-kun the most. Koreans frequently came over to my place back then, but Cha always went to bed at 10 p.m. I used to tease him for not being human, but now I think he was really professional. I was awed once when he said, ‘Football players are all same until the 70th minute. What makes the difference is the other 20 minutes, and I persist for those 20 minutes.’