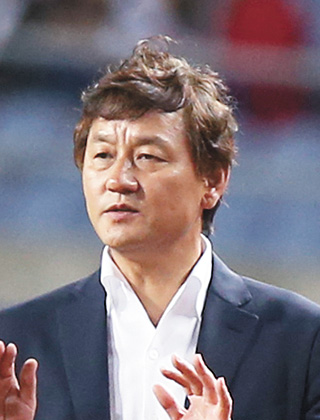 Lee Kwang-jong, the former manager of the Korean Olympic football team who is often called Admiral Yi Sun-sin for his 8-2 record against old foe Japan, is now fighting against an illness.

The 51-year-old’s life suddenly changed last month when he was leading the U-22 team in the King’s Cup in Thailand. Lee went to a dentist on Jan. 27 to treat a gum infection and was later rushed to an emergency room with a high fever. Lee flew back to Korea while the tournament was ongoing and was diagnosed with acute leukemia. He then stepped down from the Olympic team.

Head Coach Choi Moon-sik has been leading the team ever since Lee left.

The players did not know Lee’s exact illness, but they said they knew it was serious. Defender Sim Sang-min, who was punched in the face by Tohir Shamsitdinov in a match against Uzbekistan, said he remained calm during the confrontation because of the sick manager.

“I was angry, but I tried not to respond rashly,” Sim said. “All I was thinking about was that we needed to win the cup for our sick manager.”

The Olympic team posted 2-0-1 in the friendly tournament and won the cup for the first time in three years.

Lee is now undergoing initial treatment for leukemia. He takes three doses of drugs per day, which are so strong that he has to cough up what he eats. He also shaved his head.

“There is no medicine that discerns normal cells from cancer cells,” said an official from Lee’s hospital.

“We need to eradicate all suspected cells, which weakens the patients’ immune system. So it is important to keep him from getting an infection.”

Struggling against the serious disease in an aseptic room, Lee is said to be missing football.

“I was moved when he said, ‘Honduras’ U-20 team did really well in the King’s Cup and we should try to keep up with the strong teams,’ when I visited him at the hospital after the tournament,” said Kim Gi-dong, the assistant coach of the U-22 team.

“Lee seems to always be thinking about football, even though he’s sick.”

“The manager was staying late into the night in the video room to analyze other teams during the tournament,” said Lee Woon-jae, the team’s goalkeeping coach. “He must have been very stressed, and I feel sorry as a coach because I could not share his burden.”

An acquaintance of Lee said, “He is exceptionally passionate about football and it’s part of his stubborn character. I believe he will get better soon with that persistence.”

The Korea Football Association (KFA) named Shin Tae-yong, 45, as the new manager of the Olympic team to prepare the players to qualify for the Summer Olympics 2016 in Rio de Janeiro.

The KFA also promised to cover all of Lee’s medical expenses considering his contribution to Korean football.

“We decided to cover his medical expenses because he got the disease during an international tournament and he has greatly contributed to the team,” said Jo Jun-heon, a KFA public relations official.

“I hope to see him get well soon and stand out on the field again.”