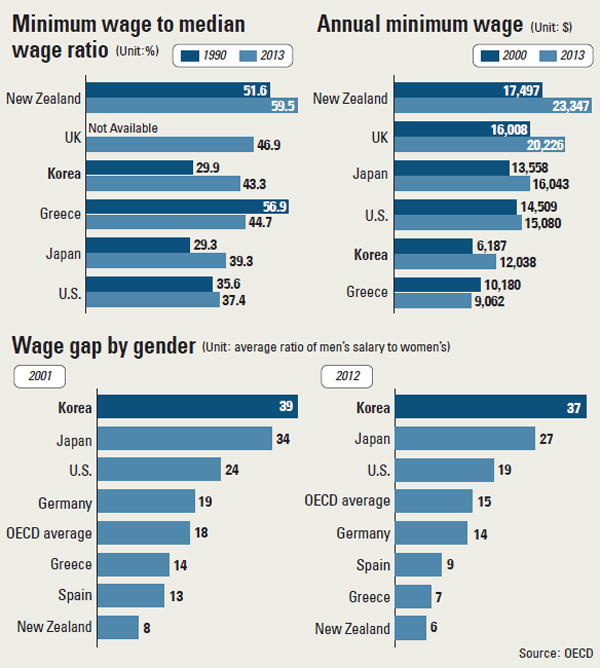 Recently, a commercial for an app that lists part-time jobs in Korea has created controversy. In a commercial for Albamon, an actress notes that minimum hourly pay increased just 370 won ($0.33) to 5,580 won this year. Then, she looks at the camera and tells part-time workers to roll up their aprons and toss them to the store owners if they are not getting paid the minimum wage.

The advertisement gained wide popularity among young people who work part time, but it didn’t sit well with the owners of small shops and restaurants who hire them.

The store owners claimed that the commercial paints them as bad people who manipulate and underpay their young part-timers.

Minimum wage has always been a touchy subject, but is Korea’s minimum wage worse than other countries?

According to data collected by the Organization for Economic Cooperation and Development since 1990, Korea’s minimum wage has steadily risen over the past 20 years.

By total value, the minimum wage in Korea has increased. In 2000 the annual minimum wage was $4,049, according to OECD data. That figure nearly tripled to $12,038 in 2013, putting Korea as the 14th member country out of 25 in terms of minimum wage in one OECD report.

From 1990 to 2013, minimum wage grew an average of 8.9 percent annually, sharper than the 7.6 percent average salary increase for people working at a business with more than 10 employees.

This trend is expected to continue as the government tries to narrow the income gap between top-tier and low-level earners. But experts say that increasing the minimum wage won’t solve the problem.

In Korea, wage gaps based on gender and academic backgrounds are among the worst in the OECD.

The average gender wage gap among OECD countries was 15 percent, and Korea had the biggest wage gap. Although Japan has the second biggest gender income disparity among OECD countries, it reduced the earnings ratio from 34 percent to 27 percent from 2001 to 2012.

“One of the main reasons Korea has such a wide gender wage gap is because the female work force is concentrated in low-paying jobs like retail cashiers and social services,” said Kwon Sun-won, a business management professor at Sookmyung Women’s University.

“Wages need to be adjusted according to the industry and it is urgent that we create female-friendly jobs where women are able to work again even if they have been absent for a very long time.”

There was also a serious wage gap depending on the education level, with Korea ranking in the top 10 among OECD countries.

In 2012, an employee who graduated from high school was paid 29 percent more than a person whose education ended at middle school or lower, and that ratio has remained unchanged since 2002.

Workers who did not attend college were paid an average of 47 percent less than those with a higher education, worse than the 43 percent wage difference recorded in 2002.

“The wage difference based on education level is largely related to the size of the company that the employees work at,” said Kwon, the Sookmyung Women’s University professor.

“Those with an education at the high school level or lower usually work at small and midsize companies while those with higher education are hired at conglomerates.”