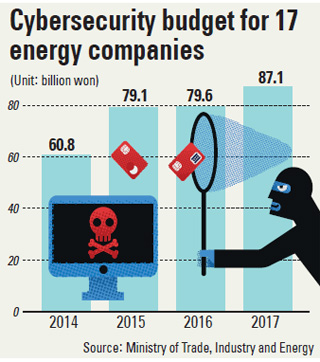 The Ministry of Trade, Industry and Energy says state-run power companies will spend a total of 79 billion won ($71 million) on cybersecurity this year, an increase of 18 billion won.

Kepco, the nation’s sole power distributor, will get 28.4 billion won and KHNP 11.5 billion won. Each of the other companies will receive up to 4 billion won.

All 17 power companies will have to structure their internal network in five systems, from the current three.

The current system is broken down into a regular network that can access the Internet, an intranet that mainly deals with document processing, and an exclusive network to control the power plant. From now on, the intranet will have an additional system for confidential technical documents like power plant blueprints. The power plant control system will also be split into two networks to beef up security.

The companies are required to establish a new department exclusively for information security of both the headquarters and regional branches. The companies will disqualify any department heads from being promoted to the executive level if they haven’t worked at the new cybersecurity department or lack background in the area.

Kepco will more than double its number of information security workers to 36 this year, and KHNP plans to add 56 for a total of 87.

As for data management in relation to suppliers, power companies will have to include clauses about biannual security inspections in supplier contracts. The regulations are intended to force companies to strictly oversee management of confidential technical and business information, such as IP addresses of corporate computers, personal information, internal electric network diagrams, security status analysis results and details about the service done by the supplier.