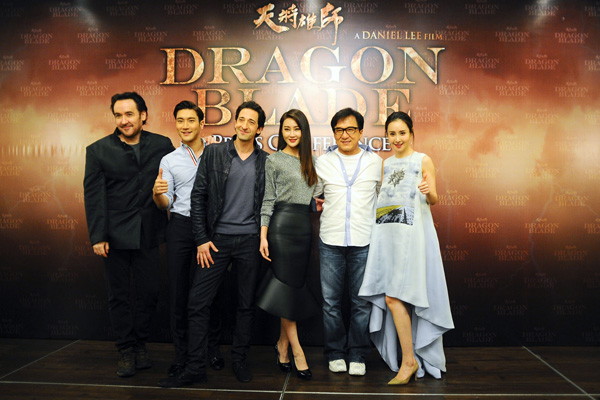 From left: John Cusack, Choi Si-won, Adrian Brody, Lin Peng, Jackie Chan and Mika Wang, the cast of “Dragon Blade,” pose for a group photo during a press conference to promote their new movie in a hotel in Kuala Lumpur, Malaysia, on Wednesday.

“Dragon Blade,” a Chinese epic written and directed by Daniel Lee, tells a story about frontier guards in a western region of China during the Han Dynasty (206 BC ? 220 AD) who come to meet Roman soldiers. Korean singer-actor Choi, known better as Si-won, a member of boy band Super Junior, will be acting as a loyal deputy of the guards’ commander Huo An, played by Jackie Chan. The movie is scheduled to be released in Korea on March 12. [AP/NEWSIS]