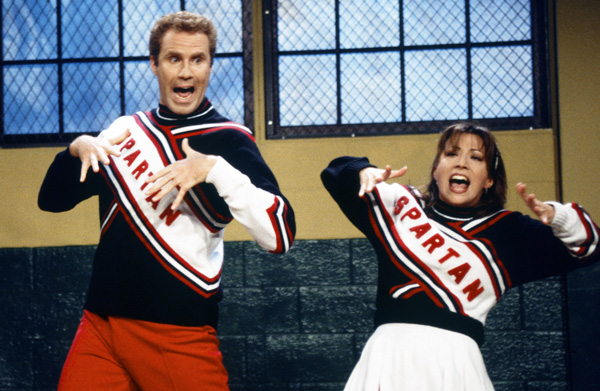 In this Oct. 4, 1977, photo, Will Ferrell and Cheri Oteri portray Craig Buchanan and his cheering partner Arianna on “Saturday Night Live.” [AP]

“The SNL 40th Anniversary Special,” three hours of it, will air live on Sunday at 8 p.m. EST on NBC.

Everyone who has ever been an “SNL” regular, guest host, musical guest or behind-the-scenes creative force has been invited. Indeed, it seems every boldface name who ever tuned in to watch might be showing up at fabled Studio 8H. Attendees announced so far range from Dan Aykroyd, Alec Baldwin and Robert De Niro to Kanye West, Betty White and Kristen Wiig. And to welcome them all, the “Today” show anchor team will host “The SNL 40th Red Carpet Live” at 7 p.m. EST.

“We waited to see who RSVPed, then we started thinking about what we could do with the people we knew were coming,” said Lorne Michaels last week. “We’re still working on it, as more people reply.” 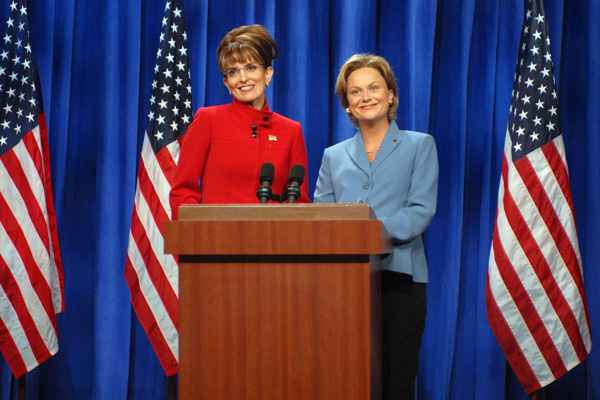 In this Sept. 13, 2008, photo, Tina Fey portrays Sarah Palin, left, and Amy Poehler as Hillary Clinton during a skit on “SNL.” The sketch comedy series will celebrate its 40th anniversary with a three-hour special airing Sunday at 8 p.m. EST on NBC. [NEWSIS]

The show will include sketches and other comedy bits employing what Michaels calls “a mash-up of different generations, so you’ll see people working with people they never actually worked with” as “SNL” regulars.

“SNL” was born as the brainchild of Michaels, then 31, who today, at 70, remains very much hands-on. He’s also very much in charge of Sunday’s retrospective.

He pointed with special satisfaction to the expected return of Eddie Murphy, among the series’ biggest discoveries whose “SNL” tenure fell during Michaels’ absence between 1980 and 1985.

“Eddie Murphy coming is a huge thing,” says Michaels, adding that his role in the proceedings “is still being worked out, but he’s been very open to different ideas.

“I know this sounds weird, because we’ve been working on the show for eight months, but we still have nine days.” That’s an eternity, as “SNL” has demonstrated with its breakneck six-day cycle for decades.

“SNL” was born into a world where there was nothing much to watch on TV other than a trio of broadcast networks. Topical comedy was almost nonexistent.

No wonder each week of “SNL” was greeted as a video godsend by its first generation of disciples, who, powered by 60-cents-a-gallon gasoline and $15-an-ounce marijuana, flocked to one another’s living rooms for smoky viewing parties, gathering around the TV set to live the live-ness of “SNL” along with its performers. Whatever else was happening at 11:30 p.m. came to a halt. It had to. Home VCRs weren’t on the market yet.

The New York it originated from, a city that “SNL” celebrated as its own hip version of urban decay, was in fact crime-ridden and destitute. Late that October, President Gerald Ford would deny federal assistance to spare New York from bankruptcy, a snub The Daily News famously expressed with the headline: “FORD TO CITY: DROP DEAD.”

Ford was an instant target of “SNL.” The day of its premiere, newspapers across the country were reporting how he, a habitual klutz, had bumped his head boarding the presidential chopper. On the first-ever “Weekend Update,” anchor Chevy Chase seized on this mishap: “Yesterday, President Ford bumped his head three times getting into his helicopter. The CIA immediately denied reports that it had deliberately lowered the top of the doorway.”

“Weekend Update,” of course, would become the show’s most enduring comic fixture, and the forebear of such fake-news ventures as “The Daily Show With Jon Stewart,” ‘’The Colbert Report” and “Last Week Tonight With John Oliver.”

No one at the time could have predicted all that, but in a remarkably few weeks, “SNL” had settled into a creative groove. By the fourth show, with Candice Bergen hosting, it had found the look and format it hews to today.

And though it took a few weeks for viewers to discover it, by the end of 1975 “SNL” was not-to-be-missed, and Chase, the breakout star among its inaugural Not Ready for Prime Time Players, was being breathlessly touted as the rightful successor to “Tonight Show” host Johnny Carson.

Sunday night will be an opportunity for viewers to survey how it got from there to here - and for Michaels to see 40 years of his life unfold before his eyes.

“I’m sure it will be very emotional,” he acknowledges. “But right now, I’m trying to just think about it as a show, and how to get it on the air.” AP