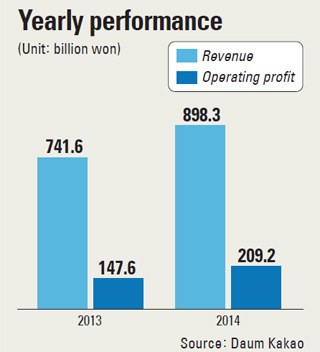 Daum Kakao, the operator of the nation’s top mobile messaging platform KakaoTalk, saw its operating profit for the fourth quarter jump 71 percent from a year earlier to 65.7 billion won ($59 million) thanks to increased growth in its mobile sector.

Those earnings were based on the first consolidated quarterly performance report announced by the company since Daum and Kakao corporations merged in October.

Sales also increased 21 percent year-on-year and 15 percent quarter-on-quarter. The corporation’s e-commerce platform experienced the most growth at 171 percent, along with KakaoTalk’s gift market.

“Seasonal factors and an increased product lineup in the KakaoTalk Gift Store contributed to rapid sales growth of 171 percent in the fourth quarter, compared to the third quarter in 2014,” a Daum Kakao spokesman said.

Average revenue per user in KakaoGame contributed to a 17 percent increase in game revenues quarter-on-quarter.

Revenue from other mobile-content platforms such as Daum Webtoon, KakaoPage and KakaoMusic saw 119 percent growth in the fourth quarter compared to the same period in 2013.

Mobile-service revenue made up 53 percent of the company’s entire sales by the end of December, and Daum Kakao said it aims to continue to strengthen its position as the leading mobile platform provider in Korea.

It has also made aggressive moves to introduce financial services, particularly with the launch of KakaoPay last September. KakaoPay has taken in about three million subscribers since the launch of an iOS version in December and is anticipated to be adopted by more than 60 million retailers.

Its other mobile-banking application, BankWalletKakao, has formed partnerships with 16 local banks since its launch in November.

The corporation additionally stated at a conference call announcing its fourth-quarter earnings on Thursday that it is investing 80 billion won in marketing for new businesses in 2015, which will include online-to-offline (O2O) business and payment services.

“Since the merger, we have made a number of exciting attempts to connect everything,” said Choi Sae-hoon, the co-CEO of Daum Kakao. “Various services introduced in 2015 will continue to reflect that vision and will be the keystones in the mobile-lifestyle platform for which Daum Kakao strives.”