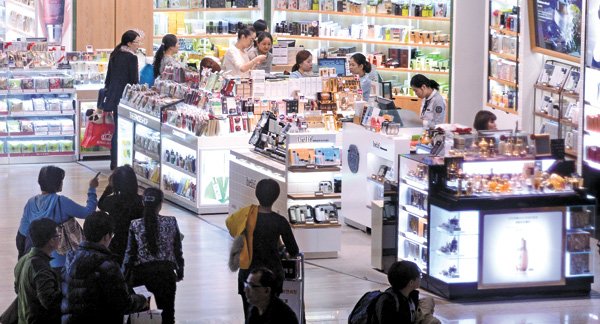 Lotte has come out on top in Incheon International Airport Corporation’s selection of new duty-free shop operators by nearly doubling its operating space and securing the rights to operate a Louis Vuitton shop, which was coveted by its rival Hotel Shilla.

Among the winners, Lotte and Hotel Shilla, which already have duty-free stores at the country’s largest airport, will be renewing their contracts, while Shinsegae and Charmzone are newcomers. Another bidder, the Korea Tourism Organization, failed to earn a spot.

The four winners can operate their duty-free stores for five years starting September. 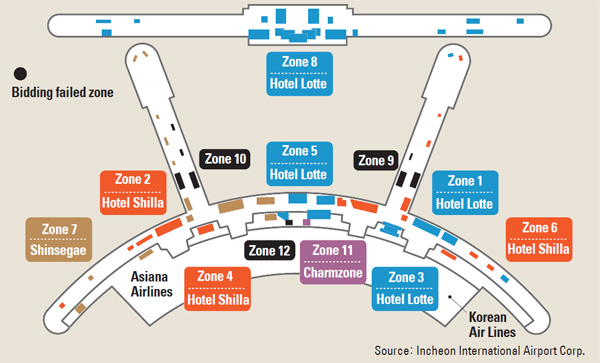 This was the third duty-free shop bid held by Incheon International Airport since it opened in 2001. Duty-free shops are a lucrative business at the airport, which is the main gateway to Korea for an increasing number of tourists.

The bidding opened for 12 duty-free zones, each of which are designated for specific products like cosmetics or liquor and cigarettes. Four of the zones were specifically reserved for SMEs.

Industry insiders said that Lotte benefited most from the bid. The No. 1 operator of duty-free shops secured four zones with a combined 8,849 square meters (95,000 square feet) of space, a 49 percent increase. Lotte gained an additional 4,935 square meters of space near departure gates for foreign air carriers and low-cost carriers.

But Lotte’s biggest advantage is its right to operate a Louis Vuitton shop. According to the proposal the airport sent to bidders, the winner of Zone 5 has exclusive rights to operate a store for the French luxury brand and has first choice on other designer brands.

“We are the ones who brought Louis Vuitton to an airport duty-free shop for the first time, but as our rival seems to have come up with a better offer, we failed to win the bid,” said an official from Hotel Shilla. “Instead, we have the chance to diversify our duty-free items such as liquor and tobacco.”

Shinsegae, another major retail conglomerate, succeeded in winning its first bid at the airport. The company was allocated Zone 7, on the west side of the terminal near Asiana Airlines’ counter, where it will sell jewelry and packaged food.

“We previously ran two duty-free stores in Busan, but there were some limitations,” said a spokesman from Shinsegae Chosun Hotel. “This will serve as a bridge to complete our distribution channel of duty-free shops to connect our online shops with the airport and downtown.”

In Zones 9 to 12, which were reserved for SMEs, Charmzone was the only winner and was given Zone 11. Bidding for the other three zones were nullified after some companies didn’t submit warranty forms. Bidding for those zones will re-open next month, according to the airport.

Meanwhile, King Power, the only foreign business operator to enter the bid, did not win a spot. The Thai duty-free chain runs duty-free shops at five international airports and three cities in Thailand. “There was big a difference in its proposal compared to others,” an Incheon airport official said.